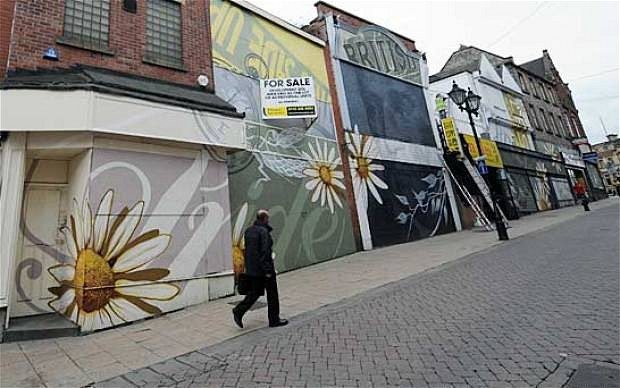 Bill Grimsey, the former chief executive of Wickes and Iceland, will release the report on Wednesday and say that Britain’s high streets are in a “deep decline” and there is an “arms race for new ideas”. However he says that there is a “frustrating sense of policy being conducted in the margins”.

Mr Grimsey will say that previous initiatives such as Mary Portas’s government-backed review into the high street were too “nostalgic” and failed to grasp the extent to which the internet has changed shopping patterns.

Ms Portas, who will appear before the communities and local government select committee to discuss her review on Monday, declined to comment on the release of Mr Grimsey’s report. However she said: “The more people who come on board [to help high street] the better. But if people think my review was about nostalgia, that’s wrong.”

The report will say that 47 per cent of the country’s retail companies — over 20,000 businesses — are in financial difficulty, based on detailed financial analysis of their accounts.

Around a quarter of these are likely to fail within the next three years, according to an analysis by Company Watch. Meanwhile 16,000 supply chain companies — which feed the retailers — are also at risk.

“It simply isn’t good enough to just wring our hands and reminisce about the good old days on the high street,” Mr Grimsey writes in The Sunday Telegraph.

The former DIY executive said he decided to conduct the review after the Portas Review was released in December 2011. “Amid much fanfare this promised the earth but delivered little,” he claimed.

“It was clear to me that Portas had failed to highlight to Government the dramatic structural changes impacting the retail industry through the convergence of changing consumer behaviour driven by technology and that brought about by the prevailing economic conditions.”

Mr Grimsey plans to meet ministers following the release of the self-funded review.

For example it suggests that retailers who open in shops that have been vacant for a year should receive 50pc rate relief for two years.

It also suggests that councils use their capital reserves to help fund small businesses.
More than 11pc of shops in Britain, or 40,000 units, currently stand empty.

Commenting on Mr Grimsey’s report, a spokesman for the Department for Communities and Local Government said: “Although we have not seen [Mr Grimsey’s] report we welcome contributions to the debate on the future of high streets.

“This Government has already put in place a wide range of measures to help towns manage the change in their high streets.”

The spokesman said the Government has lifted planning restrictions to bring more housing to the high street, cut business rates for thousands of small businesses and scrapped Whitehall guidance that pushed for higher parking charges.