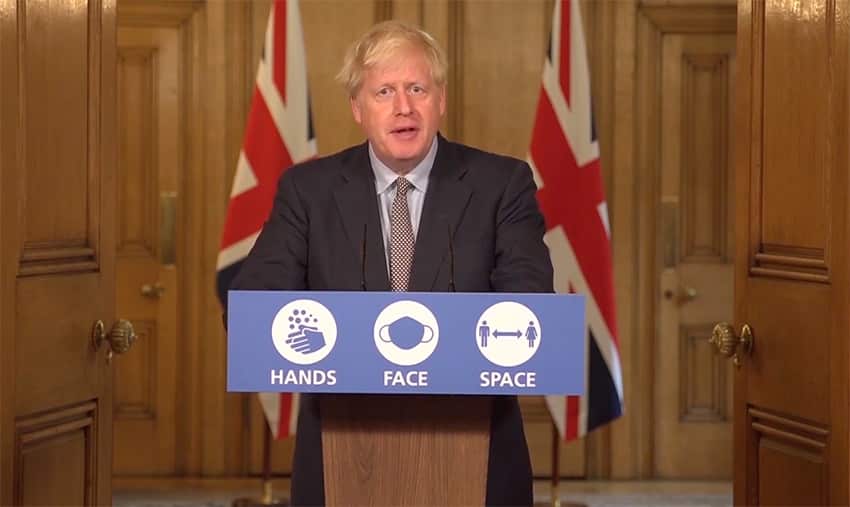 Boris Johnson said “if not now then when?” as he declared yesterday that virtually all coronavirus restrictions in England would end this month despite rapidly rising cases.

The prime minister said the country must use the “firebreak” of the summer holidays to lift all remaining social-distancing rules despite predictions from scientists that it will cause a new rise in hospital admissions and deaths.

As he sought to end months of lockdown and simultaneously urge caution, Johnson argued that a delay into the winter could be even worse.

“We must be honest with ourselves that if we can’t reopen our society in the next few weeks, when we will be helped by the arrival of summer and by the school holidays, then when will we be able to return to normal?” he said.

Under government plans, subject to a final review next week, from July 19 the legal requirement to wear a mask indoors is expected to end, as will limits on social gatherings and mass events.

Pubs and bars will no longer be required to serve customers sitting down, and nightclubs will be allowed to open for the first time since March last year.

Capacity limits for theatres and cinemas will be lifted and the government’s advice for people to work from home will no longer apply. The restrictions on the number of people who can visit care home residents will be lifted. Some curbs on international travel will stay.

Setting out a five-point plan to control the virus without lockdowns, Johnson warned that the lifting of restrictions did not mean that the pandemic was over. He said case numbers could be as high as 50,000 a day at the point curbs were ended. The number being admitted to hospital is now more than 300 a day and doubling every 16 days.

Chris Whitty, the government’s chief medical officer, said this could lead to “very high” admissions “surprisingly” quickly but that a peak would be reached before the levels of pressure on the NHS seen in January. He acknowledged, however, “some degree of uncertainty” in these models.

Johnson said almost all legal restrictions would fall away this month but he urged the public not to become “demob happy”. He added that tougher guidance might be needed in the winter but that he would “do everything possible to avoid reimposing restrictions with all the costs that they bring”.

“This pandemic is far from over,” he said. “It certainly won’t be over by the 19th . . . and we must reconcile ourselves sadly to more deaths from Covid.”

Despite the end to rules on the compulsory wearing of masks, Johnson said he would still routinely wear a covering and urged the public to exercise discretion. “I will obviously wear a mask in crowded places where you are meeting people that you don’t know, to protect others and as a matter of simple courtesy,” he said. “I think people should be entitled to exercise some discretion.”

He argued that failure to open up now would either mean doing so during the difficult winter period or delaying freedoms until next year, describing the summer as a “firebreak” because of the school holidays. “If we don’t go ahead now . . . then the question is, ‘when would we go ahead?’ ” he said.

Johnson also announced that the time between jabs for the under-40s would be reduced from twelve to eight weeks, with a plan to have offered all adults both doses by mid-September.

Downing Street said there would be further announcements within days. These will include plans to remove the requirement of fully vaccinated adults to quarantine when they arrive from amber-list countries. There will also be changes to the rules that have required pupils to quarantine if someone in their bubble tests positive.

As was reported last week, double-vaccinated people who come into contact with a positive case will be able to avoid full quarantine with a new test-and-release system. Certification of Covid status will not be compulsory for any events but businesses will be free to require it and passports could be introduced to keep venues open in the winter.

Businesses welcomed the prime minister’s decision. Michael Kill, chief executive of the Night Time Industries Association, which represents night-clubs, said it was “long overdue” to hear Johnson saying that England needed to live with the virus.

Julian Bird, chief executive of Society of London Theatre and UK Theatre, said the announcement was “a lifeline”.

Jo Goodman, of Covid-19 Bereaved Families for Justice, said that ministers were “repeating” the mistakes of last summer. “It’s a gut-churning déjà vu for those of us whose loved ones paid the ultimate price,” she said.

Sir Keir Starmer, the Labour leader, said that Johnson was being reckless. He urged him to keep compulsory masks, improve ventilation and give people proper self-isolation payments.

Travellers from the UK will be able to avoid quarantine in Germany if they have had two jabs or are recently recovered from Covid-19. The Robert Koch Institute, the country’s disease control centre, said that Britain would be removed from the highest risk category of “virus variant areas” from tomorrow.