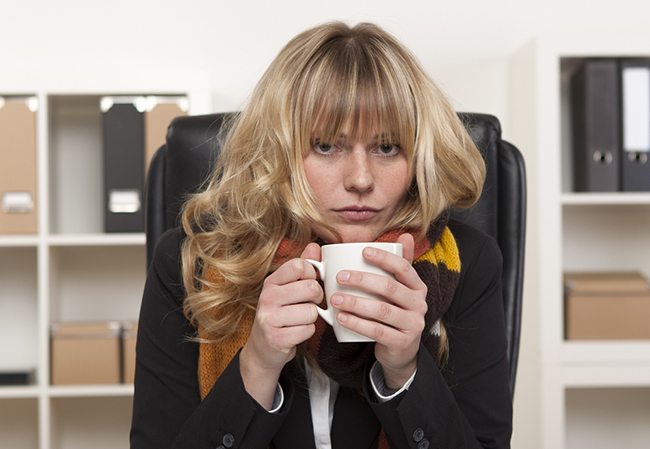 It means many women could be working in conditions several degrees cooler than they would like – and could explain why so many end up wearing their coats at their desk.

Current air conditioning standards are the result of research from the 1960s, which used a standard ‘metabolic rate’ to work out a comfortable working temperature. Metabolic rate is the speed at which our bodies burn energy, and is key to how much heat we generate.

But the study was based on the values for a 40-year-old man – whereas women have a rate that is typically 35 per cent lower.

And now researchers from Maastricht University in the Netherlands say that women do indeed prefer warmer working temperatures, favouring a room of 25C (77F) compared with 22C (72F) for men.

The study authors have now called for standard settings to be altered to take gender differences into account.

“In a lot of buildings, you see energy consumption is a lot higher because the standard is calibrated for men’s body heat production,” said Boris Kingma, a co-author of the study and a biophysicist at Maastricht University Medical Center in the Netherlands. “If you have a more accurate view of the thermal demand of the people inside, then you can design the building so that you are wasting a lot less energy, and that means the carbon dioxide emission is less.”

Dr Kingma added: ‘Thermal comfort models need to adjust the current metabolic standard by including the actual values for females.’

‘Therefore current indoor climate standards may intrinsically misrepresent thermal demand of the female and senior populations,’ the scientists said. ‘Comfort models need either to be recalibrated or enhanced using a biophysical approach.’

Image: Cold in Office by Shutterstock