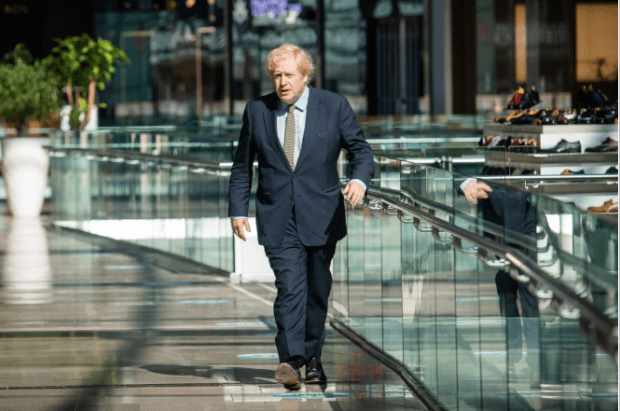 Boris Johnson has issued a rallying cry for people to “come back to the shops” as ministers watch today’s reopening to see whether faltering consumer confidence will require emergency VAT cuts.

The prime minister appeared in public for the first time since the pandemic struck Britain to say that people should “shop with confidence” as soothing the public’s concerns became central to the economic recovery.

Rishi Sunak, the chancellor, hinted that a temporary VAT cut was an option as he said that a resurgence of “animal spirits” was critical to protecting jobs.

He is considering either a blanket or a targeted reduction in consumption taxes as retailers demand an emergency stimulus. They say that the combination of nervous shoppers and strict social-distancing rules mean that the effect of reopening non-essential retail will be limited and leave many businesses in danger of going bust.

Mr Johnson has raised the possibility of the two-metre rule being relaxed by setting up a review looking at its effect on the economy and public health. He said that falling infections gave “more margin for manoeuvre” but no date has been set, with voters still strongly against any change.

Ministers have insisted that Downing Street would not rush to a premature decision on reducing the distance, which is anticipated to take weeks.

Paul Scully, the small business minister, told BBC Radio 4’s Today programme that the government would wait for data from abroad before deciding the size of any reduction or revision to social distancing guidance.

He insisted that ministers would not be rushed. “It will take a matter of weeks to do but we want to make sure we get the best scientific advice and we can look at the international comparisons.

“Clearly you have the likes of Germany, it’s one and a half metres, America it is one metre, and see how those differences land in terms of health guidance.”

On a visit to the Westfield shopping centre in east London yesterday, Mr Johnson told shoppers to stay two metres apart when they returned to non-essential stores today for the first time in nearly three months. He said that staff had been “working very, very hard to get ready for the big opening” and “we’re hoping that people will come back to the shops”.

He was “very optimistic about the opening up that is going to happen” but hoped that there would be “sensible numbers” on the high streets.

Mr Sunak acknowledged that the economy was “driven by consumption”, so it was crucial that people started spending again. He said that measures such as social distancing, one-way systems and plastic barriers had made stores safe. Speaking on The Andrew Marr Show on BBC One, he said: “The issue is not so much that they don’t have the cash, because they’ve been saving over the last few months, it’s whether they have the confidence.” Questioning “the psychology of our country” he asked: “Are the animal spirits for us to get back to our high streets in the way that we used to?”

It is understood that a temporary cut in VAT is being examined in the Treasury, but that no decision will be made until data such as credit card receipts reveal whether shoppers are spending again. Footfall in shops has reduced by 80 per cent since the lockdown and retailers expect only about a quarter of that to be reversed in the coming weeks.

Helen Dickinson, chief executive of the British Retail Consortium, said: “The reopening of non-essential shops from today is unlikely to deliver immediate relief. The government should consider options to stimulate demand, such as a short-term reduction in VAT or a temporary income tax cut for lower-income workers.”

According to a Kekst CNC poll, Britons are more worried about the economy than in many countries but are still overwhelmingly concerned about protecting health. Twenty-two per cent said that avoiding a recession should be the government’s priority, up from 13 per cent in April, but 63 per cent preferred to limit the spread of the virus.