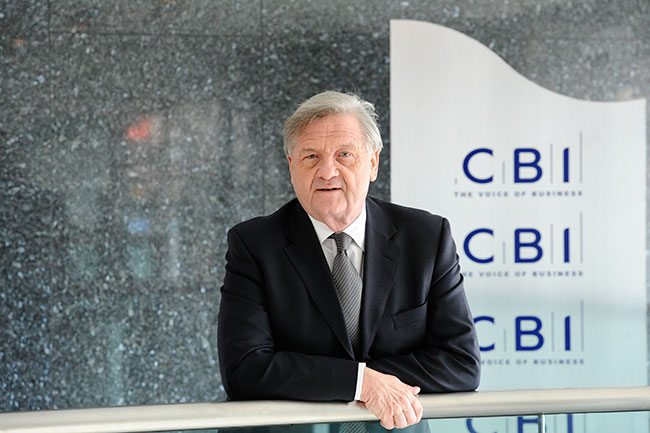 Rake will make the case for Britain remaining at the heart of a reformed EU and the importance of maintaining the integrity of the UK’s single internal market. Sir Mike will also issue a call to arms to the Government and business to tackle longer-term issues facing the country, from airport capacity to ensuring growth works for everyone.

The Annual Dinner, attended by a 1000-strong audience of senior business leaders and politicians, will be held at London’s Grosvenor House Hotel, with IBM and ManpowerGroup as strategic sponsors.

Sir Mike Rake will say: “Business welcomes the fact that several weeks of negotiations to form a new government were avoided. And business will very much welcome the continuity the Prime Minister has shown in his choice of ministerial appointments.

“Today, we are at a critical moment for growth. The election may be over, but risks remain – at home and abroad. Our fiscal deficit is still the highest of any major EU country. And on the global stage, headwinds persist. From structural challenges in the Eurozone, to Greece’s on-going debt issues and conflict in the Ukraine.”

Pointing to the UK’s strong economic growth and falling unemployment, Sir Mike will credit the Coalition for tackling the deficit and pursuing pro-enterprise policies, for example by reducing the headline rate of corporation tax, saying: “With our political future more certain and our economic outlook more positive – now is the time to tackle remaining challenges to growth.”

On Britain’s place in a reformed EU, Sir Mike will urge business leaders to speak out in favour of the benefits of EU membership, arguing the time is ripe for reform:
“Business has increasingly spoken out on this crucial issue and the time has come to turn up the volume. Speaking out clearly and in a language which people can understand.
“In the months to come, our country will have to make its own choice. A choice between openness and isolation. Between shaping the future or retreating into the past.

“The question is not whether the UK would survive outside the EU, but whether it would thrive. No-one has yet set out a credible alternative future to EU membership. The current alternatives are not realistic options – little or no influence and the obligation to comply with EU principles whilst still paying most of the costs.

“Norway is the 10th highest contributor to the EU budget – despite not being a member – and it took Switzerland nine years to negotiate and implement partial access to the Single Market.

“Business must be crystal clear that membership is in our national interest. The EU is key to our national prosperity. Letting us set the trade agenda, be part of the biggest free trade deal ever negotiated – TTIP – and be able to properly compete with global giants like China and India.

While acknowledging public concerns around immigration, Sir Mike will point out that “skilled migration” is part of the solution.

“We need to keep up-skilling our population at home and attract the best and brightest European and global talent. Many businesses – and our National Health Service – could not operate without skilled migration.”

He will acknowledge that the EU is “far from perfect”, arguing that regulating on so-called “life-style issues” should be left to member states and that “poorly thought-out legislation – especially on employment law – can be a real headache for business.”

But Sir Mike will call for the UK to redouble efforts to build alliances to achieve EU reform and to complete the single market, saying: “Today the moment is ripe for reform. The things we want are shared by our European colleagues and the EU can be more competitive without the need for treaty change.
“Reform will not happen overnight. But by working with our allies on an ambitious – yet achievable – agenda, we can make it a reality. So we support the Prime Minister’s drive for a more competitive EU. And the new Government can count on business’s support to make this happen.

“Already, we are seeing a growing consensus – from Government, business and Europe’s leaders. We have seen some encouraging signs of progress from the European Commission and we are delighted at the appointment of Lord Hill as the Commissioner for financial services, a key area for us in the UK.

“And with Vice-President Timmermans’ recent drive on deregulation, the Commission is focusing on fewer, higher-profile challenges – putting quality over quantity when it comes to legislation.

“The Capital Markets Union shows signs of this new approach – with the possibility of unlocking the potential of financial services right across the EU.

Sir Mike will highlight how the City is Europe’s financial capital, and warn that the UK regulatory environment is going above and beyond others and that there are unmistakeable signs of activity being diverted elsewhere:

“Of course – the City is ‘Europe’s financial capital’.

“Europe and the City need each other.

“And the City needs Europe as a gateway to clients, business and investment. EU reform is a chance for both to benefit.

“Right here in the UK, the financial services sector supports growing firms, invests in infrastructure and contributes significant tax revenues…in the last Parliament, we recognise that the Chancellor took action to protect the City’s interests on many occasions.

“But today, with the UK regulatory environment going above and beyond others, there are unmistakeable signs that activity is being diverted elsewhere.

“We need to retain major global institutions based in London – key to our reputation as a global hub and to our world-beating legal, accounting and other professional services.”

On tackling obstacles to growth at home, Sir Mike will say: “Our future growth depends on overcoming a whole range of challenges which have held us back in the past…the development of an Industrial Strategy – the work of two different governments – shows us what we can achieve when political will is present.
“On airport capacity, Britain’s future has waited long enough. That is why we want the Government to implement the Airports Commission’s recommendations.

“On education, we have seen some positive signs in recent years – such as academies. We want to see an education system which help prepare young people for life and work.”

On taking steps to ensure growth works for everyone, Sir Mike will say: “The first step towards this goal must be addressing our poor productivity. That means investing to get our workforce the skills they need to compete in a globalised world…by 2022, half of all jobs will require workers to have completed some form of higher education, including apprenticeships.

“But if we get skills and education right, the prize would be sustainable increases in productivity and wealth for everyone.”

Commenting on the devolution debate, Sir Mike will stress the importance of maintaining the UK’s single internal market:
“With the recent expected – but dramatic – result in Scotland, devolution is once again at the forefront of policy.

“We welcome the Prime Minister’s emphasis on the UK being ‘one nation’.

“And now is a time for a period of calm reflection. If done in a careful and considered manner, devolution can be part of the solution – driving growth across the UK.

“But looking forward, any further devolution of power must be driven by economic evidence, not political expediency.

“Above all, we must protect the crown jewel of our ‘United economic Kingdom’ – our single internal market.

“Future growth across the country will rest on our ability to trade freely across the United Kingdom, without additional cost or complexity.”