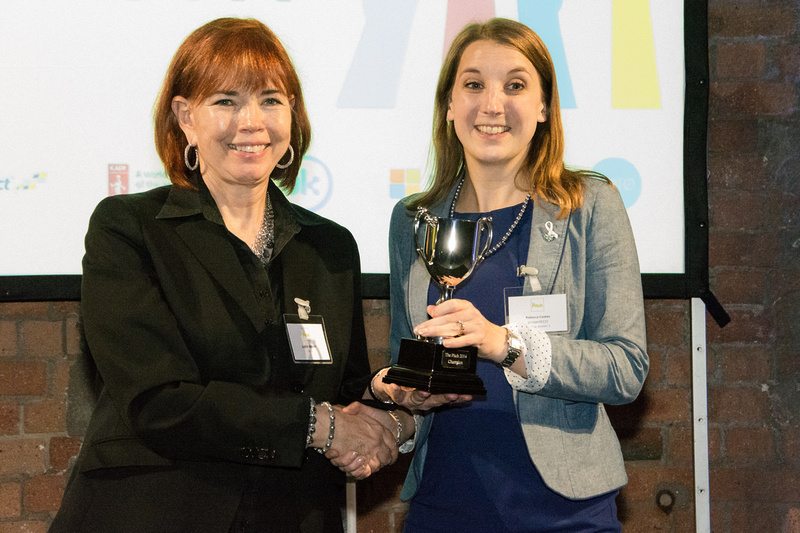 Bath-based Rebecca Coates, co-founder of propertECO, was of one of 30 shortlisted entrepreneurs who pitched in front of an audience of more than 200 during an 11 hour entrepreneurial extravaganza at Paintworks in Bristol, organised by BusinessZone.co.uk and UK Business Forums in association with AVG.

The contestants made it to The Pitch 2014 Final after 1,000 applications from across the UK were submitted, of which 100 were shortlisted to attend two intensive training boot camps in September before being whittled down to 30.

Founded in Bristol in 2008, The Pitch is one of Britain’s longest running small business competitions. It is also supported by ICAEW, Constant Contact, .uk, Microsoft Devices and Xero.

As well as the pitches, speakers at the final included Bristol mayor George Ferguson and entrepreneur Mark Pearson, who sold his business MyVoucherCodes for £55m earlier this year.

Commenting on her victory, Coates, the competition’s first female champion, says: “It’s so exciting to have won The Pitch 2014. It was really unexpected. There were so many great businesses involved and it has been quite a long journey so it’s a fantastic result for our company.

“The Pitch is not just a competition where you fill in an application form and there’s an award ceremony at the end and it’s all over. You get real value from it for your business. We’ve met so many great people that we’re going to have relationships with for a long time.

“I’ve really taken a lot from being part of The Pitch. I love the value of putting yourself out there to get your name known. You’ve got to take some risks and everyone gets nervous about doing a pitch, and that might be enough to put some people off, but I just say do it!”

Founded in 2011 by Coates and her business partner Martin Freeman, propertECO is one of the few UK firms involved in testing buildings for radon and installing specialist ventilation systems to reduce concentrations if high levels are detected. The company provides inexpensive test kits for homeowners and also checks commercial buildings.

In her final pitch, Coates, who receives a package of business support worth thousands of pounds, stressed that as well as being a successful business, the work that propertECO carries out will ultimately save lives.

As the second leading cause of lung cancer, radon exposure is responsible for more than 1,000 deaths every year in the UK. Coates said that she wanted the company to win The Pitch 2014 “to spread awareness of radon to a wide audience”.

The propertECO commercial director was one of five pitching entrepreneurs selected by judges Judith Bitterli, serial entrepreneur and chief marketing officer at AVG; Charles Carter, director of regions at ICAEW; Karen Darby, founder of CrowdMission.com and Lara Morgan, founder of Company Shortcuts to pitch again and explain why they should win the top prize

Judith Bitterli comments: “We believe passionately in entrepreneurs. Our company was founded by entrepreneurs in the Czech Republic and most of the business leaders at AVG are entrepreneurs. We support the endeavours, creativity and imagination of small businesses.

“The most successful contestants at The Pitch 2014 Final had one thing in common; clarity of purpose, mission and how they make money.

“When looking for a winner, I wanted to see a clear understanding of the marketplace, an understanding of how to make money and someone who could do it all in three minutes in a beautiful way.

“Congratulations to all the contestants. They did a great job. But a special shout out to the winner, PropertECO.”

The other finalists in the competition were Alistair Callender from Gate8 Luggage, Paul Hutson from Night Zookeeper, Ed Ward from Veglo and Richard Graham from Pulsate.

Graham won the One to Watch category for non-trading companies and pre-revenue startups and received £1,000 of accountancy advice from ICAEW.

Another prize on the night went to Emma Davidson, founder of Gecko Clothing. She won the Constant Contact Digital Marketing Award following online marketing campaigns run by the 100 shortlisted contestants.