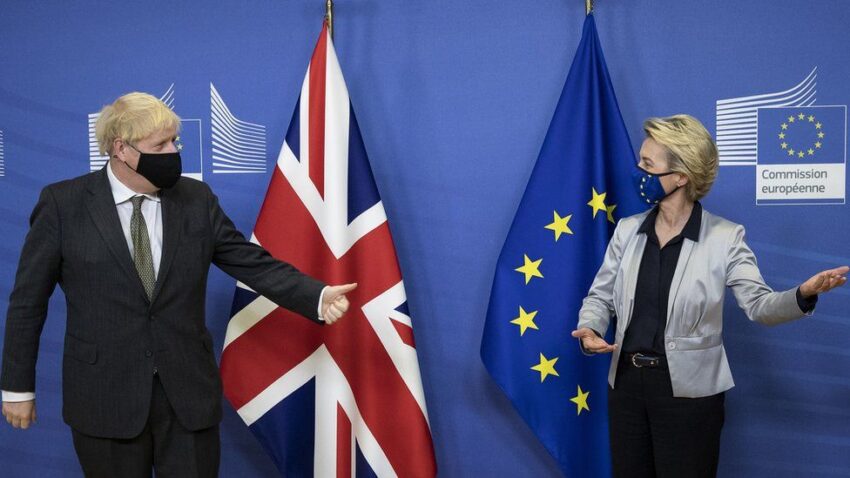 Boris Johnson told Britain to prepare for the end of the Brexit transition period without a deal as he stepped up the pressure on EU leaders before a summit last night.

The prime minister said he had the cabinet’s very strong backing in rejecting the “deal on the table” and warned it was vital that “everyone gets ready” for the no-deal option.

Asked if he thought leaving in three weeks’ time without an agreement had become the most likely outcome, he said: “I do think we need to be very, very clear, there is now a strong possibility, a strong possibility, that we will have a solution that is much more like an Australian relationship with the EU than a Canadian relationship with the EU.” Unlike Canada, Australia does not have a trade deal with Europe.

In a sign of the worsening atmosphere after the previous night’s failed dinner with Ursula von der Leyen, Mr Johnson mocked claims that the bloc and the UK “were a bit like twins”, which were said to have been made during the event. “If the EU decides to have a haircut then the UK is going to have a haircut or else face punishment,” he said. “Or if the EU decides to buy an expensive handbag then the UK has to buy an expensive handbag too or else face tariffs. Clearly that is not the sensible way to proceed and it’s unlike any other free-trade deal.”

Mr Johnson issued an explicit challenge to President Macron of France and Angela Merkel, the German chancellor, to intervene to salvage a deal while again insisting that the “Australia option” offered “amazing possibilities”.

“What I’ve said to our negotiators is that we’ve got to keep going, and we’ll go the extra mile, and we will,” Mr Johnson said. “And I will go to Brussels, I will go to Paris, I will go to Berlin, I will go to wherever to try and get this home and get a deal.” He added that he had told the cabinet to “get on and make preparations” for a no-deal outcome.

Allies said that he had universal backing for his stance from the cabinet, including from former Remainers.

Mr Johnson and his chief negotiator, Lord Frost, held a 45-minute meeting with Mrs Von der Leyen, the commission president, and her senior aide Stéphanie Riso, before a lengthy dinner with a wider group that included the bloc’s chief negotiator, Michel Barnier.

EU leaders were due to discuss the impasse in the talks over dinner in Brussels last night, with Ireland calling for both sides to compromise.

Brussels officials said that they had been briefed about Mr Johnson’s statement so it had not come as a surprise. His analogy about twins had them scratching their heads. It is thought to be rooted in comparisons, made by senior French officials, of France and Britain being like sisters living in adjoining houses who are jealous rivals.