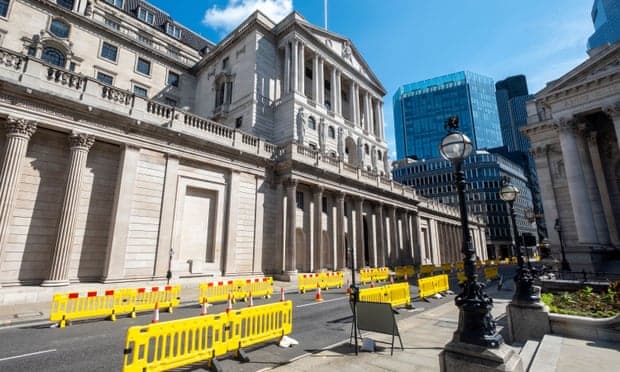 The governor of the Bank of England has vowed to do “everything we can” to support the economy amid a resurgence of Covid-19 cases.

Andrew Bailey said it was important that policymakers acted “quickly and strongly”, as the Bank announced a further £150bn of support.

Tighter lockdown rules, including new restrictions in England, are expected to lead to a slower, bumpier recovery.

Policymakers also kept interest rates on hold at a record low of 0.1%.

While the economy is expected to avoid another recession, the Bank believes unemployment will rise sharply as government support schemes wind down.

The Bank expects the economy to shrink by 2% in the final three months of 2020, before bouncing back at the start of 2021, assuming current restrictions loosen.

It does not expect the UK economy to get back to its pre-virus size until the following year.

Mr Bailey said: “We are here to do everything we can to support the people of this country – and we’ll do it and will do it quickly.”

How has the pandemic hit the UK economy?

The Covid-19 pandemic triggered the sharpest economic contraction on record earlier this year as nationwide restrictions were brought in to try to contain the virus.

Mr Bailey said the UK had not seen a similar disruption to economic activity in peacetime.

“Even then, these numbers are unprecedented in terms of the scale”, he added.

Shoppers helped the economy to bounce back over the summer, and the Bank said retail sales remained strong.

Some people had started their Christmas shopping early, while others were buying furniture and household goods to adapt to working from home.

However, it said the hospitality, leisure, and tourism sectors had “suffered from lockdown rules”, and many diners had stopped going to restaurants after the end of the Eat Out to Help Out scheme.

Fresh restrictions across the UK are expected to drag on growth. The Bank expects the economy to shrink by 11% in 2020.

The UK is not predicted to sink into another technical recession – defined as two straight quarters of economic decline.

However, policymakers now see a deeper downturn and slower recovery than forecast in August.