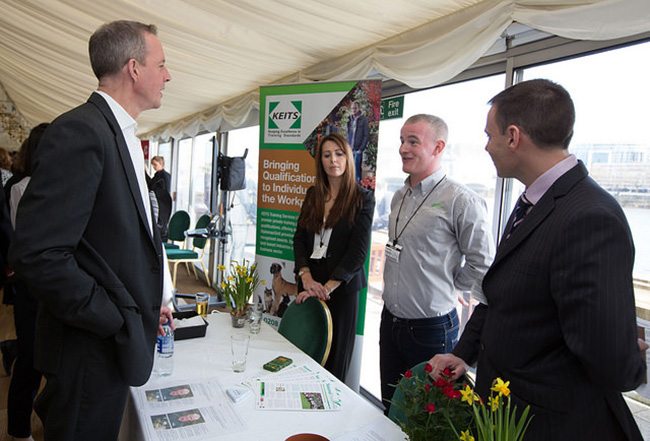 The event, organised by the National Apprenticeship Service, showcased the products and services ‘made by apprentices’ to politicians, existing apprentice employers and business leaders.

Business Administration apprentices, Mogtaba Motasim and James Barrett were invited to the event to share their experiences of taking on an apprenticeship.

Both are currently following a Level 2 Business Administration framework with sales modules and have been doing their apprenticeships for the past six months.

Both commented that they chose to do an apprenticeship because the wanted to get firsthand experience and work their way up in the business world.

Office Manager, Shannon Stobbs from Jonny’s Sister Ltd, was invited to the event to share his experiences of taking on an apprenticeship.

Shannon joined Jonny’s Sister in 2012, aged 17, straight from college. Although she had had experience working in restaurants and pubs she had never worked within a business environment before.

During her apprenticeship she was involved in the complete journey of an order, customer acquisition and retention, customer service, product design and manufacture and was awarded Apprentice of the Year in the category of Business & Administration.

A year after finishing her apprenticeship, Jonny’s Sister Ltd promoted her to Office Manager which is where she currently is.

The event took place in the wake of research from economists at the Centre for Economics and Business Research (Cebr) releasing new research showing millions of consumers would prefer to do business with apprentice employers.

The Cebr also found that apprentices deliver productivity gains of over £10,000 per annum per apprentice for companies and the benefits are seen even before apprentices complete their apprenticeship.

Jason Holt CBE said: “In launching National Apprenticeship Week we are celebrating the 2.1 million apprenticeship starts since 2010 and the positive impact they are having on businesses around the country.

“The benefits of apprenticeships are clear – they make a vital contribution to the economy, boost business productivity and give people the skills they need to get on in the world of work.

“But we know we need to do more to explain the benefits of apprenticeships to small businesses – this is why Apprenticemakers will provide SMEs interested in taking on apprentices with a mentor to help guide them through the process.”

Skills Minister Nick Boles said: “Apprenticeships make a huge contribution to the UK economy, boost business productivity and give people the chance to fulfill their potential.

“I want to thank everyone who has been involved in National Apprenticeship Week for the role they have played in making apprenticeships the success they are today.”