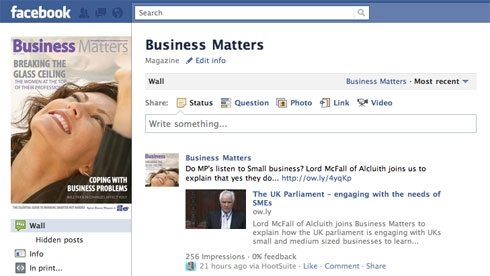 The annual survey has traditionally questioned small business owners, directors, sales, marketing and IT managers, on their views of cloud services and the reliability of the products currently available in the market and this year covered the issue of social media for the first time.
The majority of those surveyed were from small and medium-sized organisations with less than 50 employees – 62% report that they now use social networking in everyday business. The research also shows that 92% of those using it, do so to keep in touch with existing customers, whilst 78% are using it to find new customers.
LinkedIn is the most widely-used social media tool by small businesses, with 83% of those that said they were using social media, using the business-orientated social networking site. Facebook is the next most popular means of conducting ‘social business’, followed closely by Twitter at 65 per cent. Forty-four percent of these socially active small businesses also run a company blog to engage with the public, but only 3.5% reported to be using MySpace, and a handful of others are using other forms of social media such as YouTube, Yammer, Xing, Quora and FourSquare.
John Paterson, CEO of Really Simple Systems, who commissioned the research, comments, “We all know that enterprise companies are rapidly adopting social media as a means of communicating with existing customers and prospects, but I was surprised to see that adoption among small businesses was so advanced.”
Paterson continues, “Our survey shows that 80% of respondents agree that cloud systems require less internal IT-support. And with 63% stating that Software as a Service solutions are made more attractive by the current financial climate, cloud solutions continue to be a major way for companies to dramatically reduce IT overheads, removing the burden of system maintenance for small organisations who would rather allocate that resource to developing the business.”
The use of cloud CRM by small businesses has now overtaken in-house CRM, with 45% of respondents now using hosted applications as opposed to 36% using in-house CRM. Paterson comments, “In two years, we have seen a split of 47/36 percent in favour of in-house, become a 45/36 percent split the other way. CRM is now being delivered through the cloud to the majority of small businesses using such a system.”
The survey confirms that CRM systems remain the most popular type of Cloud-based solution used by small businesses and 66% of respondents reported that they are now more confident in hosted CRM systems than traditional in-house systems. The use of hosted accounting, ERP, payroll and manufacturing solutions has gone up slightly (between one and three percent), whilst one percent less companies are using a hosted HR system. Despite only a modest rise in their use, confidence in hosted systems over their in-house counterparts has risen in most areas, most notably in the payroll market, with some 54% or respondents now more confident in hosted solutions – up 10% on last year.
The survey also revealed that almost half of respondents feel as confident about the reliability, speed, data safety, and functionality of cloud applications as they do with in-house offerings. This is indicative of the now almost identical usage of hosted and in-house CRM.
Perhaps surprisingly, 40% of those questioned plan to spend more on IT in the next 12 months than they did in the last 12 months and a further 38% will keep IT spend at the same level. Paterson concludes, “This is good news for the IT sector as the signs show the dark clouds of recession and austerity seem to slowly lifting. It’s not yet business as usual, as rising inflation should be factored into these results, but it looks like the IT sector is on the road to recovery, with cloud vendors set to benefit from increasing small business confidence in the economy.”