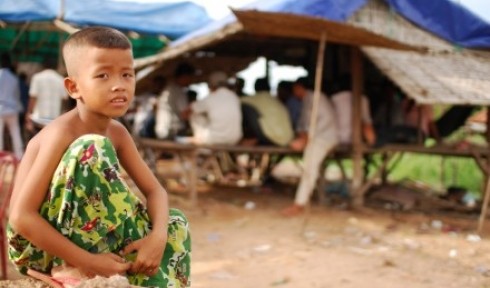 The site Lendwithcare.org allows people to lend as little as £15 to entrepreneurs in poor communities around the world, enabling them to start or expand their small businesses, feed their families and educate their children.
Deborah met a range of entrepreneurs from poor communities, including a female farmer who used her loan to diversify her crops and rent essential farming tools, which increased her annual income. Another bought bamboo cases in order to sell a sweet rice snack from her stall. One was a seamstress who used her loan to buy three sewing machines, to train girlsfrom her village for a small fee.
Unlike business models Meaden is used to seeing, the seamstress’ new venture was not all about the profit. Deborah said, “She decided to earn less money for herself, but involve more people in the village, simply because she treasures her community. In the UK I think that would be a very rare decision indeed…as entrepreneurs go, I found her to be pretty inspirational.”
Despite her Dragons’ Den persona, Meaden firmly believes profit can’t always be measured in cash terms. She said, “When I arrived I was expecting to sit, slightly Dragons’ Den style, and ask the typical questions: What do you buy it for, what do you sell it for, what are your margins? I began to realise very quickly that these are entrepreneurs in the raw; they’re not looking to become millionaires, they’re just looking to be able to live and be able to feed their family. They want to make enough money to keep themselves and their family safe. Once I understood this point, I realised that their output wasn’t just cash.”
Meaden explained why she is happy to support lendwithcare.org: “I really liked the idea of lendwithcare…I love this idea of putting together people who have money, and want to see what their money is doing, with people who need their money….I think that’s a magical combination. You get your money back, and that’s good because it means the project has been successful. But really, I think the success can be measured by the change it’s left behind.”
In Action
Farmer Phang Seoun, 49, harvests rice and watermelons on land, 10 kilometres from her home, and is raising six children alone after her husband passed away. Phang had struggled to afford to provide for her family and fund the tools needed to keep her business going.
Phang’s profile was uploaded to the lendwithcare.org website so people in the UK could lend to her to help fund her business plans. Phang became fully funded and received her request of £261.42, which she used to buy seed, fertiliser andrental of the hand tractor used for ploughing. The resulting income will beused for food, clothing, education and for expenses of the wedding of her daughter.
Reflecting on how CARE International UK has helped Phang, Deborah commented: “I believe that providing the opportunity and framework for people to help themselves is the only sustainable way forward and I saw this very clearly on my trip to Cambodia. The people there are willing to work to repair their lives; they just need even the smallest of leg-ups to get them started.”
To change a life with a loan, please visit www.lendwithcare.org.