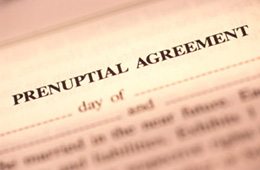 Spurned by wealthy romantics including Paul McCartney, pre-nups are beginning to hold more sway with the courts and are usually seen as the best option for bosses who are contemplating trying the knot, or anyone with assets to protect. Here we look at the pros, cons, how’s and why’s of pre-nups in the context of owner managed businesses.

Pre nuptial agreements have traditionally been viewed with cynicism. Indeed, during the heady days of romance many find it inconceivable that their wedded bliss could end in divorce. However thousands do, and with divorce rates remaining stubbornly high, the once inflammatory topic of the pre-nup has become much more acceptable.

Pre-nups enable individuals to ring-fence part of their wealth at the outset of marriage. For business owners who may have spent a significant proportion of their pre-marriage life launching and nurturing their company, a pre-nup could be a crucial agreement. Likewise for couples who have built a business together – and, where there is much more to lose – it could prevent a marriage breakdown from derailing the business.

Previously pre-nups were never considered truly enforceable in England, unlike in neighbouring Scotland, but this all changed with the Radmacher judgment in 2010. Hailed as a victory for modern society, it acknowledged the value of the pre-nup by asserting that, if entered into by both parties, fully informed of all the relevant information, then the courts would likely uphold it.

There are numerous reasons why a pre-nup can help protect and preserve your interests, not least because they manage expectations and crucially equip couples with solutions long before problems can arise – a factor that can go a long way to avoiding substantial litigation costs at a later date.

Being able to agree to the distribution and management of assets in a rational and level-headed manner enables a divorce (if such an outcome occurs) to proceed with minimal disruption to your business. No artificial timeframe is imposed and divorce proceedings can be completed much more amicably, quickly and efficiently – a benefit that can be critical to the health of your firm.

Many couples who have been down this track vouch for the fact that these agreements can, and often do, avoid the conflict and emotional trauma that can be played out in the divorce process. And as such hostility and acrimony can have a terrible impact on you personally, so too can it detrimentally impact on your business.

If you have business interests to preserve, then – however unpalatable it may sound  – a prenuptial agreement is a recommended and intelligent step to protect your hard earned assets and achievements.

One of the UK’s most sought-after divorce lawyers, founder of Jones Myers in 1992, first qualified arbitrator in Leeds and former national chair of Resolution. Peter has experience at the highest level in all aspects of financial disputes and is an expert on issues relating to small family businesses
View all posts

One of the UK’s most sought-after divorce lawyers, founder of Jones Myers in 1992, first qualified arbitrator in Leeds and former national chair of Resolution. Peter has experience at the highest level in all aspects of financial disputes and is an expert on issues relating to small family businesses