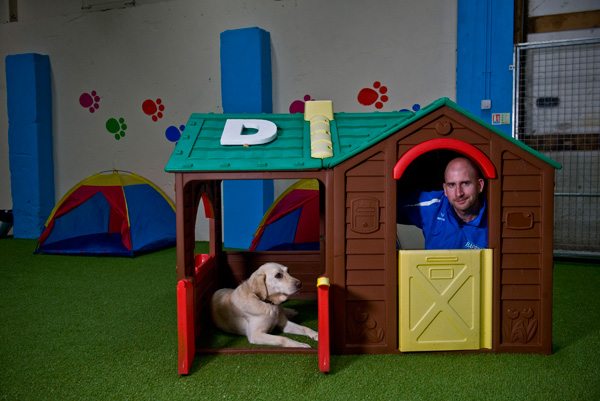 After being made redundant from a factory job, Mark struggled to find work. He was claiming Jobseekers Allowance week after week and was feeling frustrated.

He said: “Being unemployed was a difficult time for me. I was applying for everything I could as I wanted to be earning. I had been in work since I left school and had gone from one job to the other very easily. So when the recession hit and I was made redundant I found it a very hard time.”

Having always loved dogs, and owning three of his own, Mark had knew that dog walking would be a job he would enjoy.

He applied to The Prince’s Trust Enterprise programme and was immediately called to set up his application. He took part in the Explore Enterprise course where he learnt the basics of business.

With a loan of £3,300 and a business mentor from The Trust to set up Doggy Daycare, Mark was able to set up his business. He bought a van, paid for flyers for his business, and even has his own line of dog shampoos. In addition, Mark has just opened his own day centre for dogs where people drop their dogs off for the day.

Mark had left school without any qualifications, which he says was because he was young he didn’t see the importance of school. But now he’s running his own business, he is also studying a Diploma in Behaviour and Psychology, which is an equivalent to an A-level.

Mark said: “Being made redundant turned out to be the best thing that happened to me, as it meant that I could start my business. I am now doing something that I am passionate about and everything that I do is for myself rather than someone else’s company.

“I have gained a lot more confidence since I started my business. Before I was nervous talking in front of large groups of people but since I have been supported The Prince’s Trust I find it a lot easier. Without the support of The Prince’s Trust I would probably still be unemployed. I am very grateful to them for the support them have given me in setting up.”