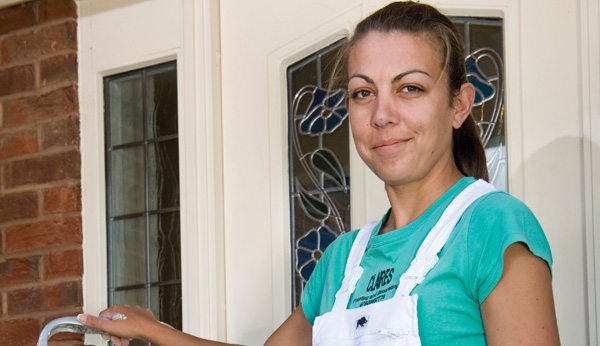 Claire left school at sixteen. She took on various jobs, until at the age of only 22, her world was turned upside down when she was diagnosed with ovarian cancer. She spent the following few years going in and out of hospital, and was left devastated when she was told she would never have any children.

“In that split second that I was told I had cancer, my world just fell apart.” Claire says. “That year is just a blur now. I really don’t know how I got through it.”

Claire’s recovery was slow but she was eventually given the all clear and she decided to follow her dream and train to become a painter and decorator. After training as an apprentice, she secured her first job in a local firm, and relished doing a job she loved every day.

Her life was getting back on track and not long after Claire was given the news she thought she’d never hear – she was pregnant! She gave birth to her son in August 2007, but just as things were looking up, her partner was made redundant. Claire sank back into depression.

She said: “Things just kept on getting worse. I had no control over my life and felt utterly helpless. I was shocked at the lack of jobs there were available at the height of the recession. Unemployment seemed to be affecting a lot of people and I started to think that I could create my own job by using my skills to set up on my own.”

It was around this time that Claire heard about The Prince’s Trust Enterprise programme. The idea of owning her own painting and decorating business offered everything that she wanted – employment, flexibility and a sense of getting her life back.

Claire nervously approached The Trust and in August 2010 was thrilled when she was awarded a £1,000 grant to set up Claire’s Painting and Decorating. She used the money to get herself a van and to pay for her public liability insurance.

Claire’s Painting and Decorating is now going from strength to strength, and running her own business has boosted Claire’s confidence. Six months after setting up her business she was in a better place and no longer needed to take her anti-depressants or see her counsellor.

Claire said: “I probably wouldn’t be where I am now if the recession hadn’t happened as it really inspired me to set up my business. It’s always going to be a risk setting up on your own but I felt it was my only choice. With hard work and determination my decision has really paid off.”