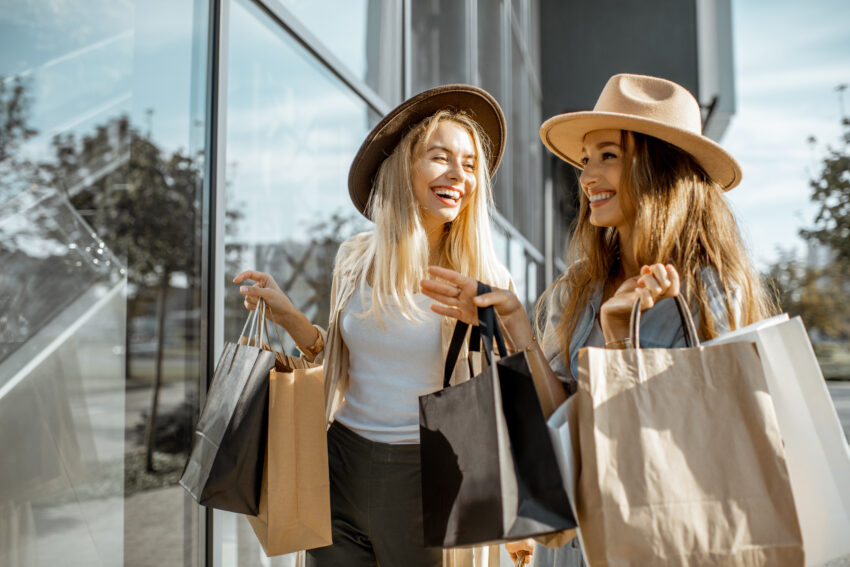 As the country lurched into its first round of lockdowns two years ago people soon realised that if they wanted to buy food to eat, clothes to wear or gadgets to make their confinement more bearable the only option was to shop online.

Shops ended up being closed for much longer than first imagined and fears around catching the virus depressed footfall to the stores that were allowed to stay open.

The pandemic proved to be gold dust for ecommerce businesses whose profits and sales boomed while their rivals were shut. The gulf between online and the struggling high street never seemed greater than when Topshop and Debenhams closed their doors for ever, their brands snapped up by the online-fast fashion rivals Asos and Boohoo respectively.

Yet as restrictions have eased the meteoric growth that online retailers had enjoyed over the past two years has come to a dramatic stop. Shoppers are returning to stores, giving fresh hopes to a battered high street, and rediscovering their other leisure pursuits as they remember there is more to life than scrolling through websites.

As a result, many are questioning whether we have fallen out of love with online shopping?

Investors in the City certainly have: in the past year, shares in “pandemic winners” Asos and Boohoo have tumbled by about 75 per cent while Ocado, the online grocer, is down by 60 per cent. The trend is playing out globally with Shopify, Etsy and Zalando all posting disappointing outlook statements and watching their shares slide. Even the tech juggernaut Amazon, which said that its UK sales last year were 82 per cent higher than before the pandemic, has posted its first quarterly loss since 2015 and its slowest retail sales growth in two decades.

During lockdowns, many people would joke about the number of brown cardboard boxes that littered corners of their bedrooms and being on first name terms with their delivery drivers as evidence of their online shopping addictions. Lockdown savings and having little to do was a potent mix for many. But the shift back to workplace life, spending on commuting, leisure activities and concerns about rising household bills has led to people being much more conservative about how much they are buying online. “A lot of people didn’t see it coming,” one retail boss said of the sudden online slowdown.

The slowdown prompted Boohoo to warn last week that its growth will be flat during the first half of this year, although it said online would continue to outperform the broader market. The Manchester-based business said that its UK sales were 77 per cent higher than they were two years ago, partly helped by a string of acquisitions. Its rival Asos has also been feeling the pain with sales creeping up 1 per cent in the first half of the year, well short of its ambition to grow by 15 to 20 per cent. A recent note by JP Morgan flagged that Amazon, Asos and Boohoo all lost sales and market share last month on a year-on-year basis.

Mat Dunn, chief operating officer and chief financial officer of Asos, said it was “inevitable that there is a difference between this year and last year . . . Once the Covid impact unwinds I think online retail will settle at a much higher level than it was before.”

According to Dunn, traffic to Asos’s website from its base of young shoppers has fallen at weekends as they now have the freedom to socialise again. However, it has enjoyed a recovery of an evening peak in visits as more people are shopping once they have returned from work.

Another fashion retail boss said he believed that while online sales would falter in the first half of this year this was only because of comparisons with restrictions during the pandemic and that online sales would outperform traditional retail growth. “Online sales are still significantly higher on a meaningful three-year comparison,” he said.

He acknowledged that stores were performing “better than anyone thought, partly because fashion has changed so much during lockdowns. After two years of wearing jogging bottoms people are coming into stores for inspiration, to see what the new trends are. There is also a lot less competition on the high street than a few years ago, which means those shops that are still around are doing even better.”

While online retailers have come under increasing scrutiny about the rising costs of transport and supply chains, many internet retailers are being given the cold shoulder by shoppers who feel they can still get a better experience in real-life stores.

Nick Glynne, boss of Buy It Direct, an online retailer for appliances, electronics and furniture said: “It’s something online retailers still struggle with; they focus on making it all techy but actually shoppers want help unravelling complexity. We’ve all followed the Amazon model, so there’s now infinite choice which means shoppers have to wade through endless reviews online. It has become exhausting for shoppers and the excitement of online shopping has gone.”

At Currys, the electronics retailer with 829 shops in seven countries, online business accounted for about 25 per cent of its sales before the pandemic but while its stores were shut they became 100 per cent. Since shops have reopened, online sales have settled at half of its revenues as shoppers have gradually drifted back into its stores.

Alex Baldock, chief executive of Currys, said: “We don’t really expect that to change, because customers want the best of both worlds. Online is really good at providing a wide range, transparency and ease. But stores have a role when it comes to face-to-face advice or providing products and services that can’t be accessed online.

“Our online [revenue figure] is still double what it was, so I wouldn’t go as far as to say people have fallen out of love with shopping online . . . We are still humans and we want to get back to spending time together, whether that’s socialising or how we shop.”

This slowing demand risks putting ecommerce players in the emergency ward after they made huge bets on the boom continuing. Studio Retail, an online retailer, collapsed in February; while Missguided, a former online fast-fashion darling that won over young shoppers, has appointed restructuring advisers. Then there is AO World, the listed electronics retailer, which has issued its third profit warning in six months, due to slumping demand and consumers cancelling their warranties as household budgets are squeezed.

Meanwhile, the supermarkets are facing a multibillion-pound crystal ball-gazing exercise about how much more they should invest in online shopping. Before the pandemic the online food grocery market was 7 per cent and it doubled in size, reaching a peak of 15.4 per cent. This caused the big supermarkets to rapidly scale up their deliveries, with the “Big Four” doubling their capacity and Tesco offering 1.5 million slots a week by cramming in click-and-collect sites into car parks.

Where the online grocery market settles is crucial for Ocado, which has built its robotic warehouses on the basis that they provide the most economical way for online shopping at scale. However, one grocer source said: “They are throwing more money at it at a time when the market is declining.”

There are some concerns that Ocado has missed the boat on the online shopping explosion, although Tim Steiner, chief executive, believes that there has been a permanent long-lasting shift.

He may be right; after all, Kantar figures show that while grocery online orders have fallen from their peak they are still twice as high as they were in 2019. The growth rates may not be as dramatic as in the past two years, but it seems unlikely that the online market will return to pre-pandemic levels.

In Covent Garden, central London, shoppers have enjoyed rediscovering the pleasure of browsing and touching and feeling items again, but they confess their pandemic online habits are hard to quit (Poppy Koronka writes).

Robyn Monahan, 19, said she liked visiting stores as a “me-day treat” after “being stuck inside for so long”. Despite hating online shopping, she was “buying even more clothes online” after restrictions eased as she wanted new outfits for work and social events.

Eva Van der Vliet, 21, said: “I don’t like to shop online as I like to try things on. I prefer to see if I can buy second-hand things in thrift shops. I like to touch and smell the clothes.”

Rebecca Rovescala, 21, said that she used stores to check how clothes fitted, “then I go online on Depop or Vinted to buy second-hand. It’s a lot cheaper.”

Food shoppers are happier to buy from stores. Richard Tricker, 53, said that having a family with small children required regular shopping trips, rather than one big weekly online visit.

Gillian Oglethorpe, 64, also preferred to shop in-person because she could “make last-minute decisions; I can see the choice and see what’s available.”

One 59-year-old Waitrose shopper said she preferred to shop in person, despite lingering concerns about coronavirus: “I like to be able to pick things out. I wish more people were wearing masks, though.”

For Erinn Kerr, 32, the founder of Ivy & Gold, the pandemic proved to be a boom time for her jewellery business as more people discovered her brand on social media than ever before (Poppy Koronka writes).

The business is named after her daughter, who has cystic fibrosis, and Ivy & Gold’s personalised bracelets are popular with women who choose designs with their children’s names. Demand has been so great for her products that she had to temporarily stop taking orders through her website during lockdowns.

In July, Kerr opened a studio space in Broughshane, Co Antrim, but soon converted it into a shop after her social media followers said they wanted one.

“I was really surprised by how much demand there has been. People want to talk to me and ask what they should get and just feel closer to the brand. I think there’s a big focus on shopping locally, and there aren’t many new shops open on the high street, so it was nice [for people] to see something new.”

Kerr said the shop was so busy that she was going to extend opening hours and hire an assistant so that she can open every day. While online sales remain high, she has seen engagement on social media fall slightly. “We just have to work a bit harder, so it’s good to have another stream of revenue that we otherwise wouldn’t have got,” she said.