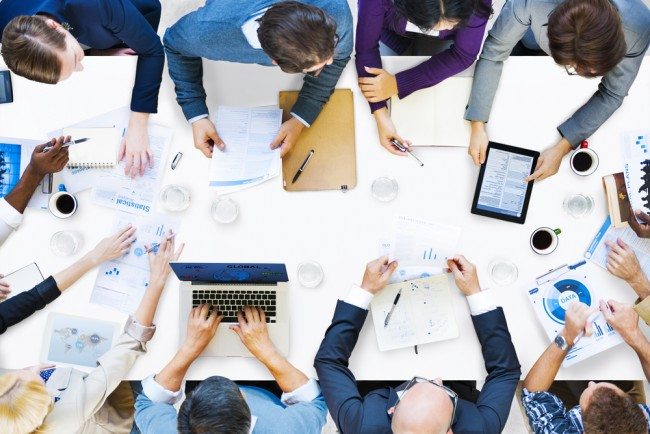 How should you handle a persistent interrupter? Will it work to just ignore the person? And how can you get the meeting back on track?

What the Experts Say
Whether it’s a team member who disagrees with your approach, an employee from another department who brings up irrelevant information, or a colleague who wants to use your meeting as a soapbox for his own personal agenda, dealing with interrupters during a meeting is challenging, says HBR. “It’s the workplace equivalent of having someone steal the parking spot you were aiming for or jumping ahead of you in the line at the grocery store,” says Judith White, visiting associate professor at the Tuck School of Business. “When someone interrupts you, blocks you, or otherwise thwarts your intended action, it’s natural to feel upset,” she says. “This is a basic instinct and you will always have a flash of annoyance.” The key to successfully dealing with interrupters is to quash your frustration and instead “operate from a mindset of curiosity,” says Roger Schwarz, an organisational psychologist and the author of Smart Leaders, Smarter Teams. Here’s how to handle this often frustrating situation.

Go in prepared
A “well-designed agenda” provides both “a structure for the meeting and serves as a point of reference,” according to Schwarz. People are less likely to disrupt a meeting if they feel like they had a hand in shaping it. Send out a proposed agenda ahead of time and ask your team for input. Give them a time frame within which to make recommendations and ask that they include a reason why they think the item is worthy of discussion. Everyone should have a say but “the team leader gets the final decision about what to include.” While an agenda does not entirely prevent interruptions, “it becomes the basis of your intervention,” says Schwartz. Once you’re in the meeting, if someone interrupts with an off-topic remark, Schwarz suggests saying something like, ‘I don’t see how your comment connects to the issue we’re talking about now. Help me understand how the two relate.’ If he can’t do that, “then you use the agenda to pick up where you left off,” he says.

Stay calm
When someone interrupts or challenges you in a meeting, it’s important to respond in “a leaderly way,” says White. “Don’t get emotional — if you look threatened or angry, you will lose the trust of everyone in the room.” Rather, your goal is to “react with humour, kindness, inclusion, and assertiveness.” Modulate your tone of voice and inflection, too. When you respond to the person who is interrupting, Schwarz says, “You should talk in a genuinely curious, not frustrated way.”

Listen, validate, redirect
Don’t be tempted to ignore the interruption and move on. At the point of interruption, “you need to stop talking and listen to what the person has to say,” says White. Then summarize his points “to let him know he’s been heard.” Let’s say, for instance, you’re leading a meeting about new corporate initiatives, and your colleague, Bob, interjects with, “Why are we bothering to discuss this? We don’t have money in the budget to execute these ideas.” You should then say, “Bob, your point is that we don’t have money in the budget for this. And that’s a good point.” After “validating his comments,” one strategy for moving on is to “redirect the discussion.” The people around the table — even the interrupter — “are counting on you to lead the meeting in a productive direction.” Start by “restating the purpose of the meeting.” In this instance, you could say something along the lines of, “We have great minds in this room and the president of our company asked us to work together to come up with cost-efficient ideas; I am confident we can do it.”

Probe further
Don’t always rush to redirect the conversation, however, warns Schwarz. Your goal is not necessarily to move through the meeting agenda as quickly as possible. Rather, your aim is to “address issues efficiently, but also in a way that leads to a sustainable solution,” he says “When a colleague interrupts you with a comment you think is off-topic, that’s not a fact; it’s an inference,” he says. Ask your colleague to elaborate on his point; if you’re still unsure how his point relates to the topic at hand, ask others at the meeting for help. Frame the interruption as “an opportunity for learning a new perspective,” he says. “Think: What does he know that I don’t know?” It may be that he has a point you haven’t thought of. “Take time to address legitimate issues because they’re not going away,” says Schwartz.

Be resolute and direct
When a colleague persists in interrupting, is off on a tangent, or keeps on making the same point over and over, be direct and firm, says White. She suggests saying something like: “Rich, you’ve brought this issue up before and we heard you. If you would like to stay after the meeting and talk with me, I’d be happy to discuss the matter further, but now we need to get back on track.” Or you could directly address the colleague who keeps on interrupting. Schwarz recommends a script like this: “Bob, I’m seeing a pattern, and I’m trying to figure out what’s happening here. Is there something going on that’s leading you to bring up these items?” While some might contend that strategy puts Bob on the spot, Schwarz says, “you need to deal with the issue in the place where the data lie — within the team.” Handling situations in the open also allows you “to model to your team how to have challenging conversations” and provides a forum for others to “add relevant information.”

Use body language to take back control
When your meeting is in danger of derailment because of insistent or hostile interrupters, you can take back control using body language and non-verbal communication. “If you’re already standing, take a step or two toward the person who’s interrupting you,” says White. “Face that person and hold his gaze for five seconds — it will feel like an eternity.” Never cross your arms. “You should appear open,” she says. Then, walk slowly around the table, “stand directly behind the person who’s disrupting the meeting, and address the rest of the room.” Proceed accordingly. This, of course, requires confidence and finesse. Even though it’s not always easy, “it’s a powerful way to exert influence,” she says.

Consider having a one-on-one conversation
After a meeting filled with tense and numerous interruptions, you might spend a little time alone “reflecting on whether you’re doing anything to contribute” to the problem, says Schwarz. It might also be worth approaching the interrupter for a one-on-one conversation. “Don’t argue with him after the meeting and never scold,” says White. “He wants to feel heard.” Instead, pose questions and listen. Ask: What is your thinking on this issue? What would you like done differently? What’s important to you? “It may turn out that you and he want the same thing, in which case, propose that you become allies,” she says. On the other hand, “you can agree to disagree.”