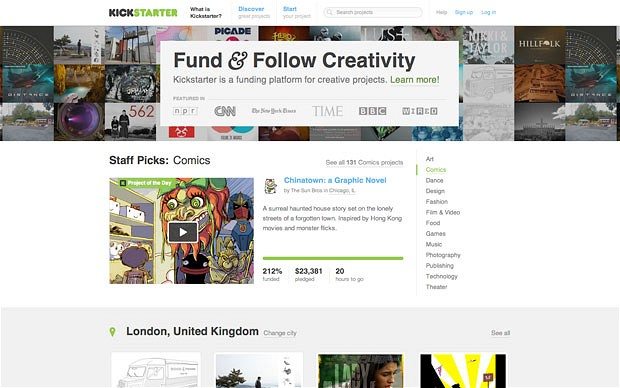 If we’ve learnt anything from Dragons’ Den, it’s that the world is well stocked with two things: first, people with very, very bad ideas, and second, people who are utterly unable to recognise how bad those ideas are. But if you think the loonies who strut up Evan Davis’s staircase are deluded, allow me to introduce you to Kickstarter.

Kickstarter is an American website, launched yesterday in the UK, that lets people seek funding for pet projects, reports The Telegraph. These could be anything: an album, a volume of poetry, vegan cookies suitable for both humans and dogs (yes, really), even a feasibility study for an elevator to the Moon. The more you donate, the greater the reward: hand over $10 to the cookie merchants, and you get a “paw-written” thank-you; give $250, and you can bring your pup over for a play-date.

Martin Usborne, a photographer from Islington, attracted $31,392 to turn his pictures of dogs staring mournfully out of car windows into a coffee-table book. The “Ostrich Pillow”, an aid to power-napping that envelops the entire head and neck, making its wearer look like an escapee from Star Trek, got $195,094 – almost three times the hoped-for total.

One implication is that there’s no product so niche that there’s not a demand for it somewhere. But equally interesting is that so many people are passionate about projects that are far too small for the media giants to bother with. Several popular pitches have come from the makers of classic video games, hoping to make low-budget sequels – the equivalent of the late, lamented Oliver Postgate asking fans to fund new episodes of Bagpuss.

The same principles are being adopted elsewhere. Last month, Dominic Nutt wrote movingly in this paper about his cancer diagnosis. Like Steve Jobs, he has a rare form of the disease called a neuroendocrine tumour. For various reasons, it doesn’t make commercial sense for big drug companies to stump up the £2 million needed for clinical trials of a potential treatment – hence the iCancer campaign (iCancer.org.uk), which hopes to fund a trial via small online donations. It might not be a lift to the Moon, but it’s one small step that would be well worth taking.