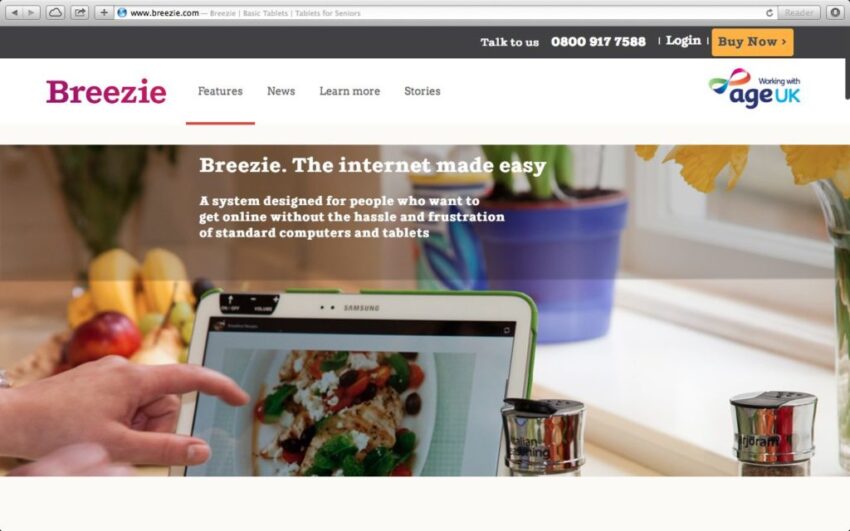 This is the third major funding round for Breezie and the oversubscription is further proof of how Breezie’s digital inclusion service is having a real social impact. Breezie, which was founded in 2011 by serial entrepreneur, Jeh Kazimi, has now raised £1,200,000 under EIS relief from angel investors over the past two years, including Barchester Healthcare founder, Mike Parsons.

Breezie will primarily use the new funds to further scale the business in the UK and, to this end, has made key hires across all areas of the business, from operations and marketing to product development and creative. It will also allocate some of the funds to running pilots in the US.

Since being founded in late 2011, software service, Breezie, has formed a partnership with hardware giant, Samsung, run a successful NHS pilot and won Startup of the Year in the Digital Leaders DL 100 Awards. It also works in association with Age UK to help millions of people who are less familiar with the internet get more out of it.

Retailing at £219 for an 8” tablet (and £299 for the 10”), Breezie alters the usual operating system interface of a Samsung Galaxy Tab 3 to hide clutter and complexity from popular everyday applications such as Skype, Facebook and Gmail – and simplify the user experience. In short, it makes digital life a whole lot easier.

Breezie Founder and CEO, Jeh Kazimi, comments: “Businesses targeting the boomer and silver markets often face an uphill struggle to gain investor interest, but the money we have raised via Clearly Social Angels and CrowdBnk is proof there are investors out there who can see the full potential of the digital inclusion market. The funds will enable us to rapidly scale our operations and brand in the UK, further improve the product and also start preparing for a push into the US. From day one, our goal has been to design and provide a service that makes the internet considerably more accessible for people with little or no technological expertise, without patronising or limiting what they can do. This latest investment confirms we’re on the right track.”

Suzanne Biegel, Angel Investor and Founder of Clearly Social Angels, adds: “As we suspected when we first came across Breezie, Jeh and the team smashed their target. They are now in a strong position to grow their market share, especially as the market is still largely unserved by mainstream technology providers. This is a company that is in the vanguard of the digital inclusion movement and one that anyone who has provided tech support to a less tech-savvy parent will immediately relate to. I love this company because ageing is an area I’ve been looking to invest in, and Jeh and his team are the right people at the right time – with the right business approach.”