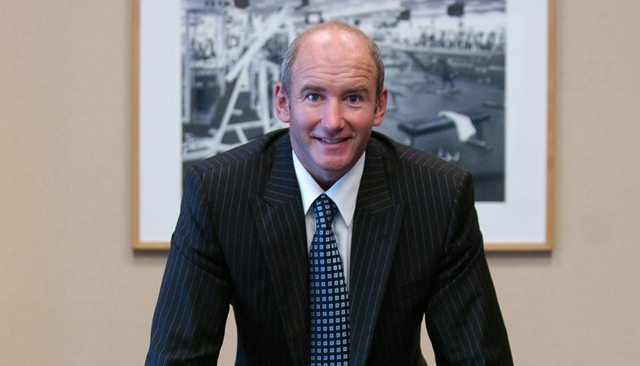 In October 2005 he decided to leave his well-paid job with AEG (Anscutz Entertainment Group) to go solo and he hasn’t looked back since.

During his time at AEG, where he says he learned the ropes, he worked in various roles. For two years he was the chief executive officer of the London Knights Hockey Club based at London Arena. He then became director of business development for the company’s six ice hockey teams based in London, Stockholm, Berlin, Munich, Geneva,  and Prague as well as a football club in Stockholm. Three years ago he also got involved with the Millennium Dome, closing the deal to rename the venue ‘The O2’.

Fast forward
Today he is the managing director of his own company, Skateco UK, a sponsorship consultancy agency which also owns the Canary Wharf Ice Rink.

The 45-year old wrote the business plan for the ice rink back in 2000. “I like to think outside the box and creating things,” he explains. But he only decided to run with his idea in 2005. The go-ahead came in October 2005, after his business plan gained the support of senior management at the Canary Wharf Group.

It may have taken him five years to take the leap of faith, but when it came to make his plans a reality, there was no time to lose. He had only 60 days to put everything in place and the rink was open, on time, in December 2005

“It was incredible,” he recalls. “I had 60 days to go from nothing to having a website, logo, marketing plan, staff, sponsorship and ticket deals. That must have taken a couple of years off my life.”

Brian managed to strike deals with various sponsors such as the newspaper City AM, O2 and Beluga Restaurant. For the ticket sales, he finalised contracts with Ticket Master and Lastminute.com. The business proved to be a success, and although Brian doesn’t want to reveal the exact figures, he says that there was a growth of 40 percent in the second year.

Despite the hard work, his passion for the business shows through. “I really, really enjoy pulling together a pool of people and, in two weeks, have a whole different setting. When the doors open you see the smile on people’s faces and sit there watching the activity happen just as you imagined.”
Apart from sheer hard work and determination, Brian also relied on his experience to get the business up and running. “The seven years I spent with AEG were invaluable, it allowed me to build contacts and gave me confidence to step out of that and take the risk.”

And when he says risk, he means it. He put everything he had into the company. “I used 100 per cent of my own financial resources. I didn’t go to the bank to ask for money, so the risk for me was quite high.”

The hard work has paid off and business is thriving. The company now has a general manager and a secretary, although Brian still works from his spare bedroom. “The business is taking more room all over the house, so we are getting to the point we will need to move out soon.”

Although the ice rink is just open for three months a year, Brian says it takes about five to six months to have everything in place. And, as he runs his sponsorship consultancy as well, he’s never short of things to do.

He also sits on the board of the Docklands Business Club – part of the London Chamber of Commerce, the Community Trust Board of Charlton Athletic Football Club as well as serving on the Board of Hammarby Football Club in Stockholm.

If things run so smoothly, is there a catch? Brian, who is already looking for a second rink, is reluctant to say there is a downside to running his own business, but eventually he concedes: “The only downside – I hate to say downside as I’m not generally a negative person – but if you push me for an answer, I would say not being able to let go of your business, ever. You’ve got to be there to make decisions all the time. There is no freedom to just walk way.”

But his life is not all about business. Brian, who is a former professional ice hockey player, says that doing sports keeps him sane and that his ideal life would involve living eight months in the UK and four in Canada, something he says he wants to achieve in a not too distant future.
“I’m very much into a healthy life style and enjoy travelling and the outdoors. I’ve got a cabin in the woods in Canada that is absolutely bliss. But I can say that it hasn’t been used much lately.”

It may sound all excitment and fun, but getting a business up and running is not for the faint-hearted. “Starting your own company is an all-consuming step. You have to have drive and determination to make something a success; you need that fire within to be able to push things forward. If you don’t have that, stick with a nine-to-five job.”