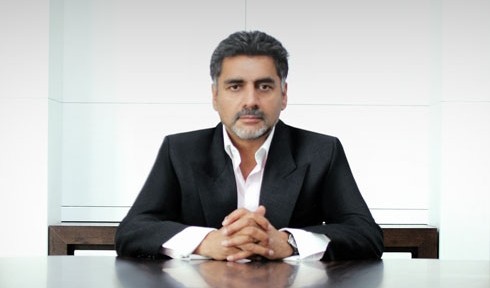 Time, he concedes, is a problem. “Before I did Dragon’s Den, I was working Monday to Friday and pretty much home by 6-7pm. Now I don’t get home until 9-10 pm and I work seven days a week,” says Caan. But it is not just the filming commitments and responsibilities to his investments that takes his time, he explains. “When I first joined the series, I expected to get about 5,000, maybe 6,000 hits to my web site from people looking for investment or advice. Last month, I got 213,000.” Of these, there are five or six approaches still in the pipeline.
Entrepreneurialism is clearly in vogue, with a fair few of us harbouring an idea that we are convinced will make us millions. Yet Caan spends a lot of time, with the MBA students he mentors and through his web site, cautioning that there’s more to it than that.
He believes that entrepreneurship is a hugely misunderstood concept, both by those with some level of business sense and the general public at large. “A lot of MBA students think that by writing the most amazing business plan, the business will come to life.
People without the academics think that they can come up with an idea in the morning and it’s going to change their lives. They don’t understand that it’s not just about the idea.
It’s the execution – having a plan, a strategy, understanding your market and the commercial financial dynamics, where you buy products from, how you price and sell it. My input is making people understand the journey they must go through in order to achieve success.”
Innovation
The mix of qualities required is best exemplified in Dragon’s Den, where Caan has to date invested three times. Of two out of three of his investments, he is fairly scathing in terms of originality of idea. He describes Fit Fur Life, a company selling dog treadmills as “OK, but not a knockout,” while Laban Roomes’ idea of goldplating luxury items, he insists, “was not a ‘wow’ idea at all.”
The Chocbox, a £1 plastic junction box that makes it safer to join electrical cables together, was probably the best idea from an innovation perspective. But interestingly enough, they are all doing as well as each other. Roomes and GoldGenie have secured a deal with Harrods, Fit Fur Life has new customers including the Guide Dogs Association, while Peter Moule, the entrepreneur behind the Chocbox, landed a £25m contract with one of the largest electrical wholesalers in the country, using Caan’s contacts.
Moule had stated on the show that it wasn’t so much the investment that he needed from the dragons, rather their contacts and expertise. By recognising that there was more required for business success than the initial idea, Caan says that Moule “got it spot on.”
Ambition
Caan’s own journey down the road to entrepreneurship began in 1985 when, against his father’s wishes, he set up Alexander Mann. It was a tough call. “My father’s ambition was that I would join the family textile business. He’d created a business that he was very proud of, so when I decided to set up something completely different – recruitment – which he didn’t really understand, he was very disappointed,” recalls Caan.
Trying to raise finance, with no business track record, proved impossible, and Caan funded himself through the use of three credit cards, each with a £10,000 overdraft facility. “I ended up with a £30,000 overdraft, which was unsecured and so quite attractive,” he says. The business soon took off, having found a niche providing headhunting services for the volume middle management bracket.
It was sold in 2002, by which time it had a turnover of £130m and operations in Australia, Europe and Asia. In the meantime, Caan had co-established Humana International, as a means of  expanding Alexander Mann, but under a global brand. Six years later, in 1999, this was sold to CDI International, a New York listed company.
Branding
Fresh from his stint at Harvard, Caan moved into private equity, creating his latest brand, Hamilton Bradshaw. Branding is something that Caan considers on a very personal level. He describes how, when he first started, he tried to imagine his business as a personality, and the sort of personality that it should have. His vision was for an upmarket high-profile executive search firm that stood for integrity, professionalism, dynamism and quality. That was encapsulated in the name Alexander, and as the jobs being placed were predominantly male, Mann swiftly followed.
The next step
“When I set up my private equity firm 25 years later, I was sitting in the kitchen thinking what sort of business will this be?” continues Caan. “For some strange reason, the image of the Bradford & Bingley logo, with the two guys in the bowler hat, sprang to mind. When you’re dealing with money it’s about being established, being safe, having integrity. I thought one should be called Hamilton and one Bradshaw.”
And what of James Caan the brand? “Well, it was either James Caan or Robert Redford, and I thought that I was more of a James Caan,” he quips.
Caan clearly relishes his role in the dragon’s den and respects his co-dragons, recognising what each of them brings to the show. Ask him which of them would invest in Alexander Mann were it to be brought to the den now, and he reasons that it would probably be Duncan Bannatyne, as, “we have quite similar styles. He’s quite down to earth in his approach and recognises the value of people.” There is a pause, to reflect the scenario. “It would be quite a compelling idea,” modestly concludes the company’s millionaire founder.