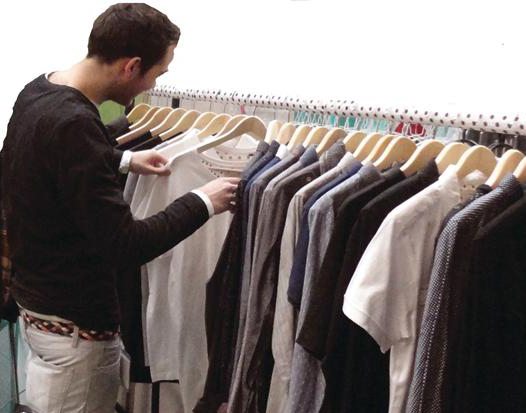 The former Exeter University student is frantically busy. Not only is he trying to ensure the launch of his fashion collaboration with New Look goes to plan next week, he is also monitoring and promoting his second business, a live Instagram slideshow app, currently used from music festivals in Hong Kong to events awards in the UK.

The young entrepreneur said: “I’ve always wanted to have my own business, ever since I was a child, and even at school I was running the tuck shop.

“I left university in 2010 and started on the Adidas grad scheme, but I left in December 2011, as I wanted to set up a fashion business. I wanted to source a range of garments and brand them individually for small independents, to compete with the multiples. I developed One Brand and begun the process”

“I went to India in December, found all the factories and sourced all the clothes ready to sell in 2012. Then I visited towns up and down the country and tried to call lots of different people trying to get them to stock my brand.

“The problem was I didn’t realise, naively, how many other people were also trying to sell to these small shops. “

However, Dan didn’t let the knockbacks put him off and he carried on travelling round the country knocking on doors and making up to 50 phone calls a day. By February he had seven or eight good quality stores on board, ready to stock his clothing.

But his insistence on creating an independent brand was to cost him and by October he was in the process of selling his business.

He said: “The reason the business failed was the cost of relabeling and rebranding the clothing in the UK, despite having a good source in India and interest from shops here. I didn’t want to compromise the ethos of the business and sell my products to a big store, so I had to travel a trying to generate small stores’ interest, which again cost lots.

“My passion is for business, not clothes, so I decided to create another clothing company, which I could sell to big stores.”
And so Dmds Enterprises was born, who (if the shipping goes to plan) will launch its first collection with fashion chain, New Look, in a fortnight.

Again, this didn’t come without a lot of time and effort from Dan, who originally hoped the collection would be collaboration with a big name celebrity, who at the last minute pulled out.

He said: “My idea was quite ambitious; I wanted to get a different celebrity to design a collection every year, the problem was I didn’t know any celebrities. I called a lot of agents and managed to get through to some who agreed to come on board, I then had to call up shops and went all the way from Primark to Selfridges. “

But, despite the knock back of the celebrity pulling out, Dan managed to convince New Look to stock his brand regardless.

He said: “I had already sourced all the clothes, and they were directed at New Look’s customers, and I explained to them I was a young start up and this was my big break and they agreed.”

However, despite all the excitement of when a deal goes to plan, living the life of a young entrepreneur has meant certain sacrifices.

Dan said: “I had to move back home to live with my parents, and turned my old play room into an office, because I can’t afford to rent one. Luckily my parents both work from home so there is an office atmosphere.

“People also always say having your own business is stressful, but it’s not until you do it, you understand. When things go wrong it can actually be pretty depressing and you often have to say no when your friends want to do something.

“However, I enjoy the challenge of creating a successful business. It’s not about all about the money; it’s about seeing a project to the end. Seeing something you created become popular and successful is a really good feeling.”

The article was written by Lima Curtis, who writes about the environment and business for many sites including Expertmarket.