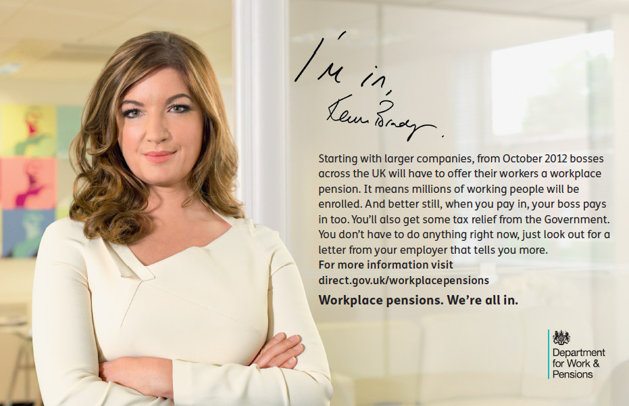 The Department for Work and Pensions has published its latest survey on retirement saving, Attitudes to pensions: The 2012 survey. The research shows nearly three quarters say they are likely to stay in a pension scheme if they are eligible to be automatically enrolled.

The research shows that many people find pensions too complex. Almost two-third do not feel they know enough about pensions to decide with confidence how to save for retirement. Just over 4o per cent of respondents with a private pension said that they had no knowledge of what their income will be in retirement, a figure which nearly doubles for those without a private pension.

Minister for Pensions Steve Webb said: “Automatic enrolment is helping millions to save for the first time and this survey shows most people will “stay in” when they are offered the chance to save in a pension. The simple fact of being offered a company pension is a clear driver to helping people save.

“However, too many people are put off saving for their old age by a pensions system which is too complex and too few know clearly what they will get when they retire.

“We are taking the hassle out of saving in a pension through automatic enrolment, we are working with the industry to restore trust and confidence in pensions and we will reform the state pension to make it simpler and clearer to understand.”

Last week the Department published its proposals to reverse nearly half a century of declining membership in workplace pensions. The Reinvigorating Workplace Pensions paper contained new ideas for sharing the risks more equally between employer and employee, and for helping people get the most out of what they save in a pension.

The findings also show that there is a particular need for young people to think about their pensions and the kind of future they would like to have. A fifth of all people with no pension provision gave the excuse that it’s just too early to start.

Among young people aged 18 to 24, nearly forty per cent said they actively avoid thinking about retirement altogether and gender is shown as a factor in pension saving. In particular, older women are more likely than men not to have any savings for later life, with a high proportion of women saying they found pensions complex and almost a third (28 per cent) admitted they are scared of dealing with them.