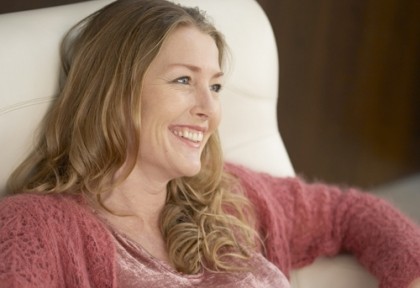 ‘You can buy a flat or start a business with this’ were Sir Terence Conran’s words to his daughter, Sophie, when he gave her shares in Habitat more than 20 years ago.  She decided to invest in a flat in Bayswater, ‘a base’ she remembers thinking.  Now, more than 20 years on, it’s still her base – both for home and work.

Working from home was always part of Sophie Conran’s plan – just more in the traditional sense.  Growing up, her goal was to be a mum.  “I’m a homebody,” laughs the 43-year-old.  “I’ve always been.  Dad worked from home, he had his workshop next door.  Mum was at home.  And it was always my big ambition; home and kids.”

But by the time her two children, Felix, 14, and Coco, 12, came along, her home was already the base for a burgeoning business empire.

It all began with the flat.  Having left school at 17 because ‘I was more creative than academic’, she initially worked as an apprentice for milliner Stephen Jones before pouring her energy into renovating her first home.  Originally, it was a cluster of bedsits.  By the time she had finished uniting and redecorating them, it became a showpiece that won her interior design commissions from family and friends.

Her Bayswater home is still the base for her interior design business today, together with being where she tastes and tests the recipes for her cookbooks – Sophie Conran Pies in 2006 and Soups & Stews published last year.  It’s also where she finds inspiration for her B&Q wallpaper collection, designs her 120-piece porcelain tableware range for Portmeirion sold world-wide, writes her column for Junior magazine and where she hangs out with Felix and Coco when they’re home from boarding school on weekends.

Part of Conran dynasty, such high profile projects could be considered inevitable.  And yet, compared to her siblings – fashion designer Jasper, product designer Sebastian, restaurateur Tom and artist Ned – Sophie took her time to shine.

She worked alongside family members in her 20s and 30s, helping her father decorate his restaurants, doing colour predictions for Jasper, running a catering company with Tom, all the while dabbling in her own businesses – running a shop, an underwear company and a lollipop venture, to mention just a few.

But it was when she returned her focus to the home and went back to working out of it that everything fell into place.  She hasn’t deviated since, even when her business grew to such an extent recently that she needed more space.  Rather than renting a premises nearby, Sophie bought up an adjoining flat in her apartment block, incorporated it into her home and it is now the base for her two assistants.

She swears her assistants, housekeeper and A4 pad full of pink and green pen ‘to do’ lists are the secret of her success.  “As I’ve got older, I’ve become more organised,” she confides.  “I’ve learnt what systems work for me and it is my lists, so that everything isn’t swimming around in my head, my assistants and prioritising.  It’s about what I can delegate and what’s important for me to be doing myself.”

Her family has been the other stable influence in her working life, with each member playing a different role.  So strong was her cookery writer mother’s influence, she followed in her footsteps.  Her father, meanwhile, ‘is great for inspiration’.  “I have hundreds of books he’s given me, always with the same message inside; ‘For inspiration!’

“But he gets nervous.  He always thinks things are going to go wrong because he’s my dad and doesn’t want me to get my fingers burnt.  So he’s not the one saying ‘That’s a fantastic idea! Go out and do it!’.”

That person, she continues, is Jasper.  “He’s always the person saying ‘She’s great, she can do it’, he totally believed in me.”

But, apart from the inspiration and clan connections, it isn’t always easy being part of such a famous family.  “Some people won’t give you the time of day while others just want to see you to say that you were rubbish.  I don’t know whether I’d have achieved as much in such a short space of time, but people’s expectations are certainly higher.  I’ve had to work hard and not rely on the name.  I wouldn’t want to anyway.”

Inevitably, Sophie has been involved in other, less successful projects along the way.  One of which was her range of pies for Sainsbury’s in 2005 that never quite took off.  “I put a huge amount of time, effort and money into that project so it was disappointing.  But with disappointments comes learning.  If I hadn’t done that, I wouldn’t be doing my books now, so it was a kind of stepping stone.”

Neither the disappointments nor over-hyped expectations have dented her confidence too much, with more big projects always on the horizon.  The latest of which is her cookery-come-domestic-goddess style school that launches this summer on the grounds of the thirteenth century Temple Guiting Manor House in the Cotswolds.

It was a concept cooked up at her kitchen table over various business meetings and is yet another home-focused opportunity.  It is a chance for individuals and groups to develop their skills in the kitchen with weekday and weekend courses in cookery, cake-baking, plucking, butchery, floristry and more.  It also doubles as a lifestyle retreat with golfing, shooting and fishing trips on the menu.

But Sophie’s ambitions don’t end there.  Ultimately, she wants to do a bed and bath collection.  And that’s alongside her dream of expanding into furniture, lighting, maybe another shop, more books and perhaps another crack at a luxury range of pies.  “It’s nice to do something different,” she smiles, “but it always comes back to the same sort of thing.  It’s always an extension of being at home.”