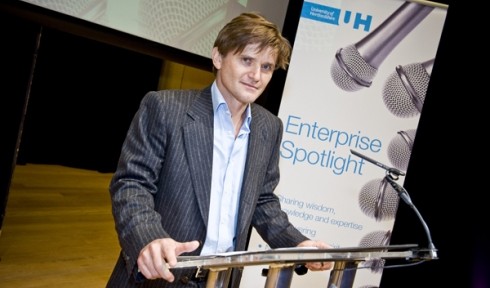 Speaking at the recent University of Hertfordshire’s Spotlight event, Richard gave an insight into his successes and failures.  He commented, “You can learn more from your failures than from your successes and, luckily for me, I had plenty of failures so I have learnt a lot!”  He talked about his time working in a trading room where he had a team of people working for him.  He used to hope that they lost money in their first few months.  He says, “There is nothing worse than some smartass who makes good money; it’s a curse – then they think they know everything.  It is far better to have some failures because you work a lot harder and think a lot more.”

Richard Farleigh is descended from a long line of sheep-shearers and was born in the outback of Australia.  He had a difficult start in life and was sent to a foster home in Sydney at a young age.  He says, “I didn’t deal with the change very well and I was put into a backward class at school.  I believed I was stupid until I won at chess and became a chess champion.”

At the age of 23, Richard went to work for a top investment bank where he had his first taste of business.  He says, “I had fun on the markets and as an economist I betted on long-term trends and derivates.  At 27 I was moved to the proprietary trading desk and was the youngest director in the bank.  I used to approach finance like a game of chess.  If you played the right game you wouldn’t lose.  It’s actually more like a game of backgammon and maximising probabilities.”  Richard was then poached from the bank and went to work as the head of a private hedge fund in Bermuda and at 34 he retired and moved to Monte Carlo.

Since coming out of retirement, Richard has invested in a range of companies.  He backed a private members’ club in London, Home House, which started out being unsuccessful and gained itself a reputation of ‘the Fawlty Towers of clubs’ until celebrities far and wide came to experience the place.  He comments, “This was a challenge as on day one we had to have 100 new staff employed and it was absolute chaos for six months”.  This business was a success when he sold out about two years ago; he then bought a restaurant called Scott’s which lost him money every day.  Now he has sold it he says, “It is now one of London’s most successful restaurants!”

Since leaving Dragons’ Den, Richard has twenty companies in various stages of success and failure, one being for radiation detection and another for asthma.  When asked what motivates him to push forward, he answered, “You want to have that feeling in life where people are happy and you want to leave a trail of happiness behind you.  I can never understand how people make money in a bad way and enjoy spending it.  I don’t get that concept.  I am not particularly religious but I do have some kind of sense of ‘what goes around comes around’.  I am backing some things now that are not for charity, but if they work they will really improve people’s lives; some are biotech and drug development.  It’s really nice to think that you could pull one of these things off.”

As for TV programmes, Richard says he is busy trying to learn to cook for the BBC, although he wouldn’t give details of the programme.  We asked Richard some questions including:

What advice would you give to potential entrepreneurs?
Being an entrepreneur is about common sense, imagination and motivation. You have to focus on all three but sometimes common sense and imagination don’t work together.  An example is ‘Twitter’ – this doesn’t follow any logical thought pattern.  You need to have imagination but, once you have the idea, implementation comes down to common sense.  It’s not as easy as it sounds! Then you need motivation because it is always harder than you think.  There are 100 failures for every success and it is hard work.

You have a website which invites entrepreneurs to send in their business ideas.  How many ideas have you pursued?
I have had about 6,000 emails and started conversations with a number of people, but I have only pursued five or six, and that is partly due to my limited time. Requests vary from young entrepreneurs and businesses for investment to advice and requests for employment.

What can make a person successful?
You need to have some ability and take advantage of the opportunities that come along.  Frequently, I meet people who I think are capable and who have some opportunity but they don’t seem interested in pursuing it.  I met a young guy recently when I rented a house in Marrakesh who was looking after the place and he could not have cared less.  The guy was bright and I said to him he was missing the point because there are a lot of people renting this property, paying a lot of money and one day one of them may offer you a great opportunity.  I would remember you if you did a fantastic job here – and one day you may want to create your own rental property and be looking for backers.  I believe you have to create your own luck even if you don’t see the next step and, if you do a good job, you just don’t know who is watching.

What advice would you give to businesses trying to raise investment in this climate?
It’s a very tough time right now and there is no point in giving people false optimism.

Do you have any advice for businesses starting up?
It’s largely about common sense, imagination and motivation, but I would say that, like any house renovation, it takes twice as long and costs twice as much.  In all business plans I have seen there are less than a handful that have ever been achieved.