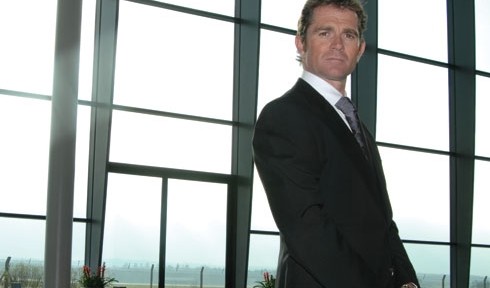 So Imagine Homes was born. The concept, which lures so many would-be landlords, is simple – sourcing off-plan property from UK developers and selling them to investors with a two-year rental guarantee income at 15% of the purchase price.
Before Imagine Homes, the 46-year-old ran his own television company, which did predominantly sports programmes. Working for someone else has never suited his personality, he says. “Ever since I left school I only worked two years for other people. My general business experience is varied and I could apply everything I learned over the years to Imagine Homes.

“When I was a child, I used to tell people I wanted to be an entrepreneur although I don’t think I knew exactly what it meant”.
As it turned out, his childhood dream did come true and, if Imagine Homes is anything to go by, success is not alien to him.
With a turnover in excess of £400m, the business, which initially involved only three people – Bovey, his secretary and a person in Dubai – has now 140 employees in Farnborough (the company’s head office), London, Dubai, Singapore and Ireland.
“The main task for me is managing this growth. We started four and a half years ago, so we are a young company that is growing very quickly, which is really testing.”ExpansionThere are no signs that this growth will stop any time soon. Bovey is already planning to expand the business and looking into other key countries. He is also opening the first UK ‘buy-to-let megastore’ at the end of the year in Chiswick, London, where people can go to see and choose properties around the country for investment.
He puts the success of his company down to his single-mindedness and determination. “I’m definitely the sort of person well suited to running their own company,” he adds. “I never had partners, apart from financial partners, because I’m very single-minded when it comes to my business. If you look at successful entrepreneurs they are very single-minded; they have to be. This is what separates people who work for themselves and those who don’t.”Risk takerHe is also not afraid of taking risks and is happy to put his money where his mouth is. “Clearly I had to invest a certain amount of money myself, which I do to this day, but I went to HBOS earlier on and fortunately they liked the concept of Imagine Homes.”
But it is not always plain sailing, as Bovey admits. “Running a business this size can be pressured, of course. It can be stressful at times as you are always making big decisions, but as the old expression goes if you want the fruit to fall, you have to shake the tree. You can’t have success and monetary rewards if you don’t take risks. The more risk you take, the more reward you may get.”
Despite the challenge, Bovey says he is really good when it comes to work-life balance.
“My time is spent visiting those various operational centres and involves a lot of international travel so managing my time can become difficult,” he says. “But if you are a CEO in a company and you are forced to work 20 hours a day, there is something wrong with your organisation.”
He adds: “Delegation is difficult for entrepreneurs as they always believe they can do better themselves. But you simply can’t do everything so I surround myself with the very best people I can find.”
He usually leaves his home at 8am and is back by about 7pm to spend time with his wife and children. He is passionate about football and an avid Chelsea fan. And in his spare time he plays tennis and polo, as well as being a qualified helicopter pilot.
“I’ve been flying for 15 years and I find that therapeutic; it takes my mind off work. I also put a lot of effort into my family. I have a wife and three daughters aged between 11 and 15.”He and his wife, television presenter Anthea Turner, have also been involved in charitable work.
They launched the Grant and Anthea Charitable Foundation in 2006, which organises the famous annual Grant and Anthea Summer Ball whose proceeds go to nominated charities.
Running Imagine Homes and pursuing his persona
l interests may well keep him busy, but Bovey also has fingers in other pies. He has his own property investment company, Veritas One, with holdings of around £40m. He has a 50/50 venture with the Bank of Scotland (Veritas Investment), which will create a £500m residential buy-to-let property portfolio – £120m is already invested. He also owns Imagine Furnishings, which turns over about £7m per year. The company is the sole supplier of furnishing for Imagine Homes properties.
He says his motto in life is “respect and success”, a combination which, in his case, has proven to be much more than mere inspiration.