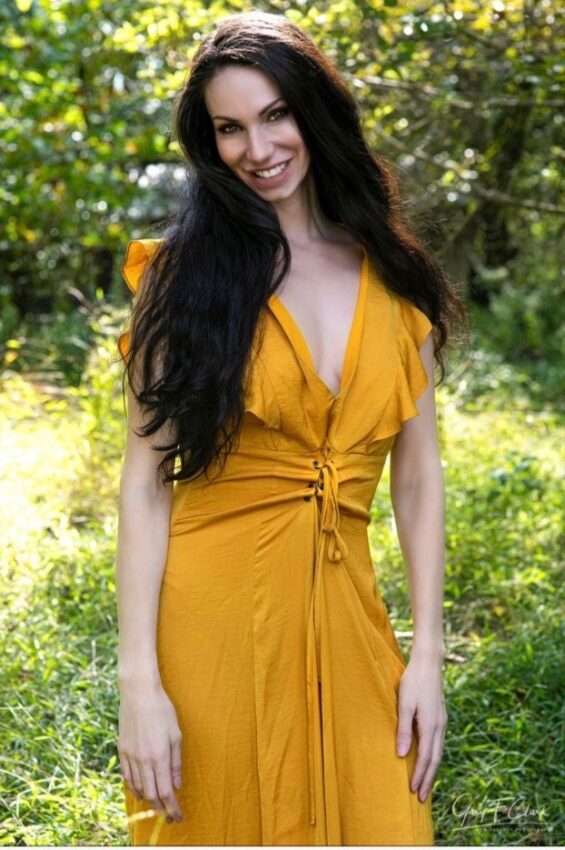 Kristen Symbula is a fashion model hailing from Philadelphia, Pennsylvania, who found her way into the modeling industry at an early age.

She was first recruited at fourteen years old, beginning her career with John Robert Powers Modeling School. Her early experiences in modeling gave her the context needed to reclaim her self-esteem and body image, which had suffered as a result of childhood bullying.

Despite her early recruitment, Kristen still saw education as an important part of her future. This led her to enroll in religious studies and philosophy at Temple University in Philadelphia. She fought hard for her success through a modeling career that spanned fifteen years, pushing through long odds and shrugging off rejections in pursuit of success.

In her thirties, Kristen transitioned away from modeling to focus on her career as a fitness and wellness coach, as well as a professional dancer. She is now busy pursuing those vocations, while also working to complete her master’s degree in anthropology. Her passion for dance carries over into her free time, which she spends reading and volunteering at a local animal refuge, as well as dancing.

Thank you so much for joining us in this interview series. Before we dive into our discussion, our readers would love to get to know you a bit better. Can you share with us the backstory about what brought you to your specific career path?

Well, to be honest, it started with the way I was bullied when I was growing up. I was really tall and really skinny, and for whatever reason, the other kids just latched onto that. At one point, it got so bad that I had to change schools. I was first recruited into modeling at fourteen years old, and as surprising as it might sound, it was just a natural fit for me. Modeling helped me to re-contextualize my appearance, and it gave me a lot more meaning to the way that I look. It gave me somewhere I could fit in, which isn’t something I ever really had before.

What strengths do you think made you successful as a model?

I think I was just resilient, you know? No matter how many times I got rejected, I just continued to push forward. Instead of focusing on any rejections I encountered, I instead focused forward on what and when my next job opportunity might be. As a model, an actress, or anyone else who works in the entertainment industry, it’s very easy to get disheartened as you come to understand that you’re not going to be what everybody wants. But you have to stay the course and work through that if a successful career in show business is something you really want.

The road to success is hard and requires tremendous dedication. This question is obviously a big one, but what advice would you give to a young person who aspires to follow in your footsteps and emulate your success?

Make sure that you’re willing to give up everything in pursuit of your success. If you’re not willing to give up everything to be a model, it’s not likely to work out. Understand that it’s nothing like a regular 9-to-5 job, or a corporate job. You don’t just go to college and enter the workforce. There are no guarantees, even if and when you have the qualifications. So you have to be ready and willing to fight hard and not give up, because there are millions of other beautiful, aspiring models that are in exactly the same situation as you.

Often, leaders are asked to share the best advice they’ve received. But let’s reverse the question. Can you share a story about advice you’ve received that you now wish you never followed?

At one point, I was told by a runway coach that I needed to lose 25 pounds, and I would never be successful if I didn’t do that. At that time, I was only 120 pounds. That was a tough pill to swallow, and especially with the current trend toward body acceptance in the modeling industry, I really question whether following and internalizing that coach’s advice was the right call.

What is the most striking difference between your actual job and how you thought the job would be?

Since I went to modeling school, I was fully prepped on exactly what I would be doing, so I thought I knew what to expect right from the start. I was taught everything from what to expect from a runway show to how to make an impression to what to pack in my travel bag.

But I think the one thing I didn’t know was that when you go to a casting call to audition for a show, they’ll decide within seconds whether or not they want you—and there’s a very high probability that you’re not going to be booked. You have to get very used to rejection, and that’s one thing I wasn’t prepared for. As a young model, I just assumed that I’d go in and get booked for this show and that show, but that’s not the case for most models. It works that way for supermodels, but certainly not for everyone, or even for most. I had to work through that on the fly and come to understand that rejections aren’t personal.

Which three character traits do you think were the most instrumental to your success?

First and foremost, I think my personality really shines through in this career, since I’m really friendly and I have a lot of interests. Second, my diligence. If and when I want to go after something, I go after it. Third is my willingness to make sacrifices and put the job first. I had to put a lot on hold, including my master’s degree, to pursue the career I wanted for myself.

What are the myths that you would like to dispel about being a model? Can you explain what you mean?

There are a lot of common, hurtful myths about models. There’s this idea that we don’t have a brain, or any skills outside of modeling. There’s also the myth that we all do drugs and suffer through anorexia. I’m not going to claim that these issues don’t exist at all within this profession—they certainly do. There are models that do their fair share of drugs, and models that experience body dysmorphia. But these issues aren’t nearly as common as people like to think, and they’re certainly not common enough to justify painting all models with the same brush.

If you had to narrow it down to just one thing, in your opinion, what would improve your industry?

I think modeling is already changing for the better, in that there’s a lot more body acceptance and a much stronger push for body positivity than there was throughout most of my career. This is a wonderful development, and I hope to see things continue even further in that direction.

What successes do you foresee for yourself, whether professional or personal, in the next 5 years?

Well, I’m in my late 30s now. Over the last several years, I’ve largely moved away from modeling and into work as a wellness coordinator and as a dancer. As time rolls on, I see myself getting married, having children, and finally finishing my degree. Those are my goals.