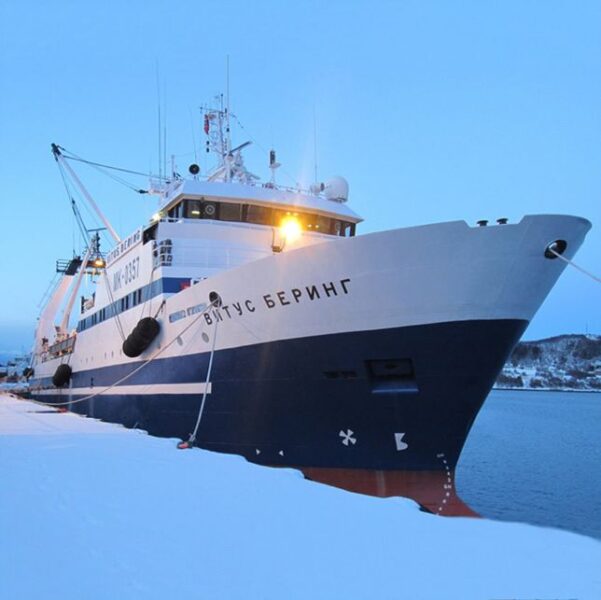 Dostoevsky once wrote that the secret to a successful life ‘is not only to live but to have something to live for’.

As a result, it’s likely that the great man would have seen the modern world as one where individualism abounds, while collective identity and common purpose are side-lined. Yet a notable exception to this phenomenon is the hardworking men and women of the global fishing industry. Working out at sea, the crew becomes the collective and the vessel’s mission becomes a uniting purpose.

Employees of Norebo, the Russian fishing giant, are committed to ensuring that the company continues to lead the industry. Yet to achieve this, Norebo sees real value in connecting and learning lessons from Russia’s seafaring history. Cementing their relationship with the past, Norebo recently paid tribute to Vitus Bering (1681-1741), the Danish cartographer and explorer, who led the Russian discovery of North America, by naming a vessel in his honour.

Today’s Vitus Bering, operating out of Petropavlosk-Kamchatskiy, is a testament to the Dane’s achievements, while his story serves as inspiration to all the crew. And what a story it is. A lifelong Russophile, Bering enrolled in Peter the Great’s Russian navy in the early 18th century, rising to the rank of Captain.

Despite a happy family life in St Petersburg, Bering took charge of the ‘First Kamchatka Expedition’ in 1725 at the request of the new Tsar. Leading a crew of 34-men, the legendary Russian sailor and navigator Alexey Chirikov among them, he successfully established that the Asian and American continents were separated entirely by water.

Like Norebo’s success today, this discovery was celebrated back in Russia and Bering enjoyed the trimmings of fame. He was promoted to the rank of ‘Captain Commander’ in the Russian navy and was adored by his Tsar. Not content to rest on his laurels, and considerable wealth, he began to plan a new expedition, plotting the exploration of the North American coastline and the islands of the North Pacific. His crew set off in 1741, with Bering captaining the St. Peter and Chirikov joining him once more as the Captain of the St. Paul.

The journey was tough, with a storm eventually splitting up the St. Peter and the St. Paul. Yet despite this blip, Bering and his crew never lost hope and one fine day, with the sea calm at last, the North American coast finally hove into view. Landing on Alaska’s Kayak Island, Bering charted the coastline before his rapidly diminishing resources forced him to begin the journey home.

Unfortunately, Bering and a number of his crew fell ill on the return leg, forcing the St. Peter to land on the Commander Islands. Alas, Bering could not be saved and died there in 1741, less than 200km from his beloved Russia. His remaining crew, as resourceful as ever, constructed a makeshift vessel and pulled off a daring escape from the island, making it back to Kamchatka and informing the authorities of Bering’s death.

In what proved to be a twist of fate, Chirikov and his crew on the St. Paul, they too having landed on the Alaskan coast, had searched for Bering for a number of weeks without success. Upon returning home, Chirikov bravely rallied a rescue team to search the islands off Kamchatka for the lost Bering but alas did not chance upon the Commander Islands.

In a fitting tribute, the Bering Strait, Sea, Island, and Glacier were all named in the great Dane’s honour. The crew of today’s Vitus Bering (pictured above), Norebo’s gleaming 64-metre-long vessel, use their industry nous, resourcefulness, and navigational talents to cross the seas in search of cod, redfish, and haddock. Such is the illustriousness of Russia’s seafaring history that even a world leading firm like Norebo sees great merits in looking back and honouring a hero like Vitus Bering.