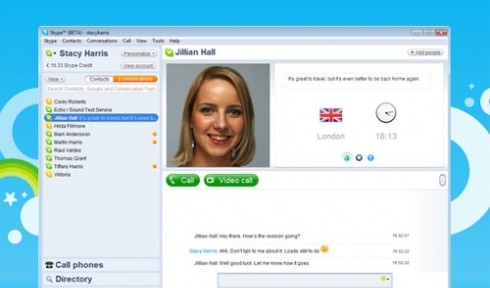 The case was about whether the software of the site was owned by the founders via their firm, Joltid, or by eBay.

In a complicated deal, the founders will drop their lawsuit against eBay and take two seats on the board of Skype.

Skype’s software lets computer and mobile phone users talk to each other for free and make cut-price calls to mobiles and landlines.

The deal, announced by eBay in September, is is expected to be finalised in the fourth quarter of 2009.

As a result of the agreement, eBay will keep a 30% stake in Skype rather than the 35% it originally announced.

“At the same time, eBay continues to retain a significant stake in Skype and will benefit from its continued growth.”

Skype founders Niklas Zennstrom and Janus Friis will now own a 14% stake in the new Skype.

The other new owners are Andreessen Horowitz – run by Netscape co-founder Marc Andreessen – as well as private equity firm Silver Lake and the Canada Pension Plan Investment Board.

But Index Ventures, which originally invested in Skype, will no longer be part of the new takeover.

Mr Zennstrom and Mr Friis had been trying to buy back Skype for the past year, which eBay bought for $2.6bn in 2005.

They sued the company in the UK, saying their company Joltid owned the rights to underlying source code that props up the Skype network.

Unlike traditional mobile calls, which are transmitted over a cellular network, Skype turns your voice into data and sends it over the internet.

Since being acquired, the number of registered Skype users has risen to 405 million from 53 million, though free user-to-user calls still dominate the service.