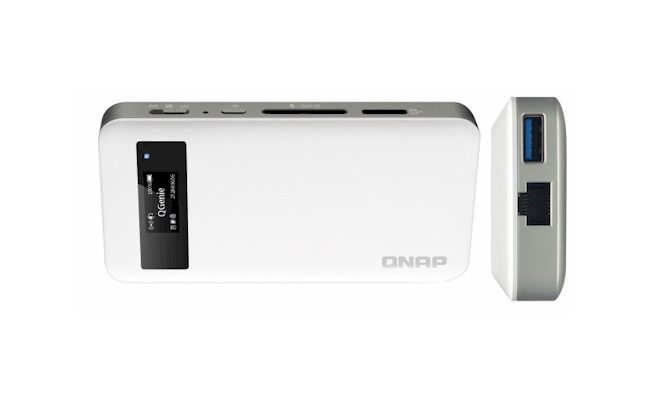 QGenie shares Internet access wirelessly through wired connection which is the devices biggest failing. The ability to slot a SIM in and have this as a true dongle would make this a real asset for the mobile traveller.

QGenie runs QNAP’s QGenie OS that supports SMB/CIFS file sharing, WebDAV and both UPnP and Bonjour discovery. Files can be accessed via the built-in myQNAPcloud service and Qfile mobile iOS and Android apps.

The built-in 3000mAh battery provides up to 10 hours of operation and charges devices with fast USB charging from your smartphone to your laptop.

The QGenie also can be used as a USB-connected portable SSD when connected to a Windows or MacOS system via its USB 3.0 port.

The device also supports file copies to and from its SD slot and is a very good device for just the battery recharging and portable storage options, but could have been great with a SIM slot.

The QNAP QGenie Pocket NAS is available at EBuyer.com