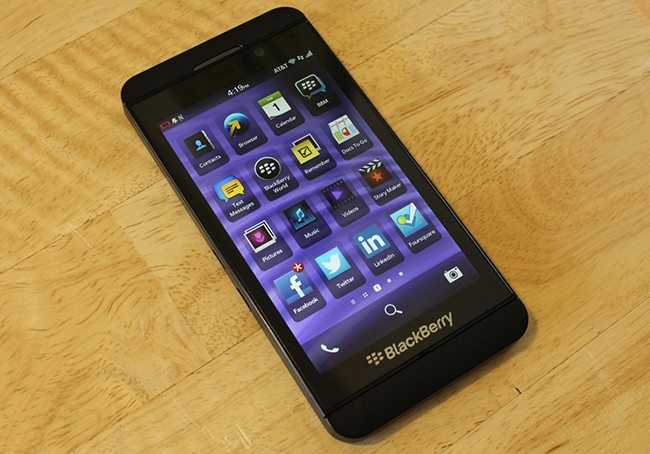 The BlackBerry Z10 is a thoroughly modern smartphone with an excellent modern mobile OS. It feels sturdy and it has an strong focus on messaging. It offers better video support than Windows Phone 8, better messaging than Android, and more elegant graphics than Apple’s iOS.

Z10’s physical design is so understated that it tends to fade into the background, and while the OS has plenty of interesting ideas, it can’t overcome how far behind it is in terms of third-party app support.

I have personally been a BlackBerry user for most of my working life and struggle with virtual touchscreen keyboards so it was with some in trepidation that I took this Z10 to test as would have preferred to be reviewing the Q10, out in a few months which does retain a physical QWERTY keyboard. However I seem to be in the minority as there are no flagship smartphones with full QWERTY keyboards any more, despite the fact that physical keys are still much easier to type on than virtual ones.

As with most slab-style phones, the front is dominated by the 4.2-inch 1,280-by-768 LCD. At 356 pixels per inch, the display is higher density than both the iPhone 5 and the Samsung Galaxy S III, although it isn’t the tightest screen around. There’s a Power button on the top, volume rockers with a hardware Mute button on one side, and micro USB and micro HDMI ports on the other. Turn on the Z10 on and you’ll see a sharp LCD with rich blacks.

Behind the NFC-enabled back panel to find a long, narrow 1800mAh battery and a microSD card slot that supports up to 64GB cards without a problem. The 8-megapixel camera lens sits on the back left corner.

BlackBerry is very proud of its software keyboard, calling it the best in the business. The innovation here is to space the four rows of keys further apart vertically than typical for more accurate typing, along with a very aggressive autocorrect system that learns from your common word sequences. Possible autocorrects and shortcuts float above individual keys as you type.

The keyboard takes up less screen space than Windows Phone and some Android keyboards, and the keys are nice and wide. As I have said virtual keyboards and I don’t usually see eye-to-eye, however I found this more accurate than the iOS and Windows Phone keyboards over long-term use. However make no mistake, it’s still a software keyboard, and longtime BlackBerry fans will miss their clicky, tactile buttons.

The Z10 runs the brand-new BlackBerry OS 10, which bears no resemblance to the BB operating system of old; it’s much more like the OS on the BlackBerry PlayBook tablet. The company says 100,000 BlackBerry 10 apps are available when the phone launches, (including -pardon the plug- our own Business Matters one) so while the device is incompatible with apps for older phones, BlackBerry has done a solid job of building up a launch library for the new platform.

The key idea in BlackBerry OS 10 is “flow.” There’s no system-wide Back button; you’re always moving forward. The BB10 experience pivots around a page of your eight most recently used, minimized apps, called the Active Frame. Swipe left to go to the BlackBerry Hub, or the universal inbox; swipe right to view a very iPhone-like set of app icon pages. If you’re doing something and you want to do something else, you swipe up, minimizing your app, to return to the central screen where it’s easy to jump into another app.

Swipe, flip, swipe: Just like with the good old Palm WebOS, you work up a real rhythm here. BlackBerry OS 10 isn’t customizable like Android or Windows Phone, but to some extent it customizes itself: Those eight most recently used apps can update their pages as new information comes in, potentially making them a little like Android’s widgets or Windows Phone’s Live Tiles. You can’t move them around, though: They’re just the most recent ones you’ve used.

You’d expect a BlackBerry to excel in the voice department, and in this case you’d be right. In my tests, the Z10’s earpiece delivered round, warm voice tones at moderate to high volume. The speakerphone was downright excellent—unusually clear and loud enough for most any situation. Transmissions from a noisy street scene blanked out the background noise very well. A call from the speakerphone let through a little bit of background noise, but the voice was fully forward and very well rounded.

I used the Z10 on EE’s network and got very fast 4G internet access and it really did open up mobile usage.

As I re-box the phone for its return and return to my current BlackBerry Bold 9900 my mind turns to think, given just how good the Z10’s virtual keyboard is, is the trade off with physical keys worth a reduced screen size for?

No matter what device you have on the BlackBerry 10 platform, it is the OS that really is way head of its rivals and if only RIM had opened up their app market sooner they may well have not only retained but grown their business market.