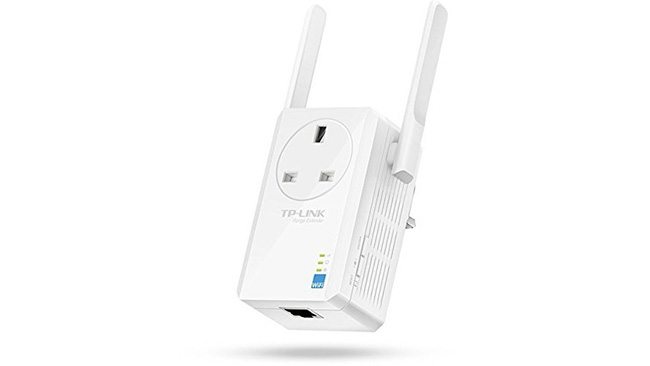 Everyone expects a good internet connection everywhere these days, so weak Wi-Fi signals, dead spots and slow connections must be banished.

If you have a large office or one that has dead spots a Wi-Fi extender like a TP-Link TL-WA860RE could be what you need.

Before we start this review it is important to note that this isn’t a powerline networking plug: the TL-WA860RE simply takes the Wi-Fi signal from your router and re-broadcasts it. It uses the mains only for it’s own power – not a network connection.

We were amazed at how easy it was to install this device as all you do is plug it in somewhere near your router where the signal is strong. Then it’s a simple process of pressing your router’s WPS button and the corresponding button on the TL-WA860RE. Less than 30 seconds later the two devices had paired and the router’s signal was being repeated.

If your router doesn’t have WPS, you can use the very easy to follow instructions to manually configure the adaptor with your Wi-Fi settings at 192.168.1.1. Once programmed, you can relocate the adaptor to another socket further away from your router: not at the edge of it’s coverage but where the signal is still strong enough. An LED on the front tells you whether it’s too close, too far or just right.

Thanks to a mains pass-through socket, you can plug the adaptor in anywhere, even if the mains socket is already in use. Just as useful is the wired Ethernet port on the bottom which you can use to provide an internet connection to a printer, a hardwired computer, or other networking device that lacks Wi-Fi. If you have more than one such device, you can buy an Ethernet hub and attach that to the TL-WA860RE instead to multiply the number of ports.

Two external, rotating antennae mean the TL-WA860RE isn’t the sleekest or most compact extender. However, you’ll soon forgive this when it delivers a Wi-Fi signal to areas that were previously bereft of wireless internet.

As the TL-WA860RE mirrors the current wi-fi connections you do not need to keep re-entering credentials or switching networks if you move around your office from desk to meeting room and back again.

There is very little to really say about this device as it simply does what it says on the box. It opens up your wifi connection painlessly to areas where it didn’t previously reach in a painless and cost effective manor.

The handy pass-through socket also means that it disappears and after a day you will forget it is even there apart from the fact you are connected to your network in places where you weren’t able to previously.