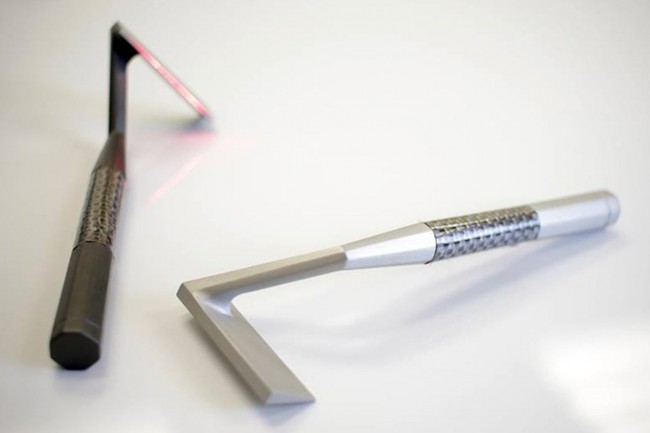 But even Kickstarter and reality combined cannot keep a good idea down: the laser is already back — on Indiegogo, reports Wired.

The Skarp Laser Razor raised more than $4 million (£2.6m) in its initial Kickstarter funding drive, easily surpassing its initial goal of just $160,000, on the promise of providing a laser capable of “an irritation free, incredibly close shave”.

The prototype of the laser — as presented on the Kickstarter page — looked just like a cheap disposable razor, but with a shining red edge instead of a steel blade. The laser would cut the hairs instead of the steel razor edge, reducing irritation — in theory, at least. “The Skarp razor is powered by a small laser which cuts through hair for an incredibly close shave,” the project promised. “Without irritating or damaging the skin.”

For just $89 the project offered backers the chance to “join the shaving revolution” and own their own laser-powered hair removal device, with an estimated shipping date of March 2016. And the world’s press was duly stunned, receiving coverage from Business Insider, Mental Floss and Buzzfeed.

Unfortunately, Kickstarter wasn’t impressed, for the simple reason that there is no public evidence that the laser-based razor actually exists in the form described — or anticipated — in its marketing materials.

One video of the laser system at work does exist (above), but shows a red light just barely managing to cut a few hairs at a time — hardly enough to function as a usable razor.

And given that Kickstarter requires projects to have working prototypes in order to accept funding, that wasn’t enough for the campaign to be successfully completed on the platform. The site declared the project was “in violation of our rule requiring working prototypes of physical products that are offered as rewards” and promptly cancelled the page.

Of course, this is the internet — and Skarp is adamant that their product is workable. So within hours of the Kickstarter campaign being cancelled, it had already launched a new page on Indiegogo, raising more than $20,000 in the first hour of its new 13-day funding push. “[Indiegogo] have been incredibly helpful & they believe in the Skarp Razor as much as we do,” Skarp said on its Facebook page.