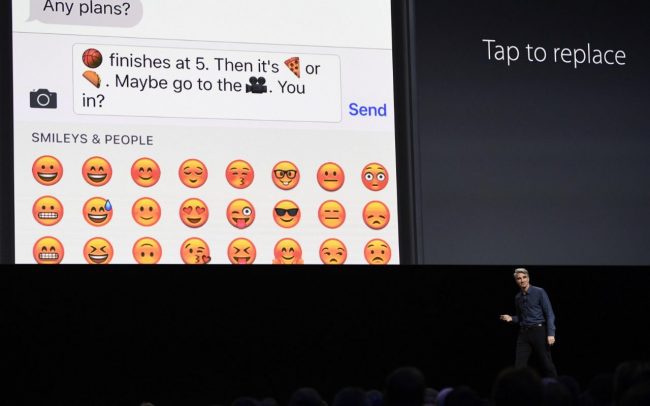 The latest version of the iPhone and iPad software has been with us for a few days now. Here we look at the best features:

Hate pressing that home button to see your notifications? Apple’s got you covered. In iOS 10, the phone’s accelerometer will respond to you picking it up by lighting up the lock screen, showing your latest notifications.

To be fair, this might be one of those features that you don’t know you need until you’ve tried it. Especially since Touch ID is now so fast that it’s hard to press the home button without unlocking your phone.

Apps will get a lot more useful without you having to actually open the app itself in iOS 10, as Apple introduces widgets – extra information from an app – on the lock screen and when using 3D Touch on an app.

Widgets will let you see calendar appointments, weather info and so on when swiping left from the lock screen, or check a sports score by using 3D Touch on a sports app such as ESPN.

Some of you out there might count Compass as your most important app, but for many of us it is simply taking up real estate on the homescreen.

Although not mentioned in Apple’s keynote, developers who have downloaded a beta release of iOS 10 say they are finally able to delete many of the apps that come with the iPhone, such as Stocks and Mail.

It’s 2016 and you’re still communicating with words? Shame on you. Luckily, iOS 10 has a fix. Type out a sentence and, when you select the emoji keyboard, the Messages app will highlight certain words you can replace with an emoji. So type “basketball” and it will suggest a… you get the idea.

This might seem trivial but it can take a long time to find an emoji if you don’t know where you’re looking, so a lot of the time it might just be quicker to type the word out and get the phone to do the work.

Never have to listen to your voicemails again: iOS 10 will include a feature that automatically transcribes an answer phone message left by a caller.

The feature builds on Apple’s visual voicemail feature introduced a few years ago that let you listen to voicemails within the Phone app rather than having to ring a number.

Compared to the likes of Facebook Messenger, iMessage has seemed a bit unloved in recent years, with precious little changes. But not for much longer: the Message app has several big changes in iOS 10, one of which is its own App Store.

This means services for ordering food, shopping, travel and so on will be integrated within iMessage. And one of the best features: You’ll be able to send money back and forth.

Apple Music appears to have been a success since it launched last year, with more than 20 million paying subscribers on the streaming service, but it did have its critics.

For iOS 10, the software has been rebuilt from the ground up showing a cleaner design. Or in Apple’s words: “It uses a new design language that allows the music to become the hero and a new structure that makes it easy to navigate and discover new music.”

Siri is getting on for five years old now, and has started to show its age compared to some younger models such as Amazon’s Alexa. Which is why Apple has given it a new lease of life by opening the personal assistant up to third party developers.

This means you’ll be able to ask Siri to send a WhatsApp, order an Uber and so on.

Yes, Apple Maps was a bit of a joke when it first launched, but in recent years it has improved significantly, and added features such as public transport.

In iOS 10, Maps will get a huge redesign with larger buttons, making it much simpler to use. And it will be open to Extensions, allowing you to book an Uber to a destination or reserve a table with OpenTable.

Maps will also remember where you parked your car automatically guiding you back to it using GPS after that long shopping trip when you can’t remember which floor you parked on.

Apps like Timehop have become a popular way to relive past memories, but they don’t have access to your whole photo library like Apple does. In iOS 10, Apple will debut a new “Memories” feature that automatically stitches together a video of a time and place, such as holidays or weddings.

The feature uses computer vision software that is able to group together pictures of places and people to create personalised collections of images.