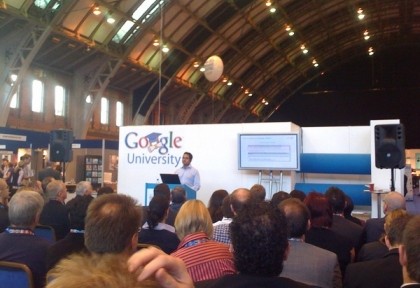 You have an auditorium of people, you’re administering death by PowerPoint and you know you need to do something to engage them.
So someone in the audience has an idea and you ask them if they could sketch it as a diagram. You take a pad over and a peculiarly thick pen, they scrawl on the paper – and it appears on screen, in real time, as they draw it.
This is because the pen – and the USB key you’ve put into your computer – comprise PaperShow, a system that takes whatever is drawn onto the special paper they provide and puts it onto your laptop screen, and by extension wherever your laptop display is focused. It’s straightforward to use after a slightly fiddly set-up, in which you have to deactivate your computer’s Bluetooth and set up the key as a Bluetooth receiver instead; once you’re over that it’s a breeze and audiences love it. One user we spoke to said it turned his presentation into a conversation, which is exactly as he wanted it.
Auditorium and keynote speech settings are of course only one possible use of this gadget. Any setting in which you want extra participation will make this work. The interface is a paper pad, so you can pass it around – and unlike a whiteboard with multiple inputs from tablet computers, which could also do the job, this costs £115 per unit. Mac users will have to wait a few months for their release unless they install Bootcamp or one of the other PC emulators and install a copy of Windows, at which point it starts to work beautifully. You can also use the memory/Bluetooth key for storage – for example, storing your presentation.

Logitech has released two new presenter tools for those auditorium moments when you’ve seen your competitor dashing to and from the computer and prodding away to change to the next slide, or asking a colleague to switch to the next image.
Best for larger gatherings is the Presenter R800. This has buttons you can operate to change slides, clearly, and also a timer which vibrates when you’re two minute, a minute and 30 seconds away from whenever you’re due to finish, and when it reaches zero it starts to count the minutes so you know how long you’re overrunning. Its reception range is 100 ft, so you can do a lot of wandering around a pretty substantial room without losing control of your slides, and its laser pointer is equally visible at a distance. This costs £69.99 and has a smaller sibling, the R400, which has a 50 ft range instead and fewer bells and whistles, costs £44.99 and will still control your presentation without say the timing functions.
Logitech guarantees only that these devices will be compatible with PCs, presumably because of warranties and suchlike; we tried one with a Mac running Powerpoint for the Mac and it worked perfectly without any problem at all.
Some readers might have tried the PowerPoint controllers which you can find on (for example) the iPhone. Many of these have positive feedback and appear to work; they are third party applications, however, and there is no guarantee they will work when there’s an upgrade since none are officially sanctioned by Microsoft.
Logitech has also issued some new mice which are great when you can’t predict what sort of surface will be available. The Performance Mouse MX (£89.99) and the compact Anywhere Mouse MX (£69.99) both work on smooth glass surfaces, which is usually death to a mouse, by detecting tiny scratches and irregularities on the surface.

The temptation, when there are laptops available for around £300 or small netbooks for under £200, is to go and buy one of those and take that around with you when you’re on the road showing stuff.
The problem with that option is that the displays start to let you down – hooked up to a projector the small sub-£200 models often distort the picture and the larger cheap models are heavy and look distinctly non-businesslike.
Many people – your correspondent included – opt for Apple for portability, but this is expensive and will require an adapter (under £20 from any Apple store but another layer of fiddling). For easy use with most peripherals like the aforementioned pointers, mice and Papershow products it makes sense to stick with PC for the moment, and MSi’s recent X600 laptop releases are a portable weight and have full spec for a PC. They start at £599 for a model with 320 gigabytes on the disk and no optical drive and move to £799 if you need the CD and 500 gigs of storage as part of the deal.
In terms of where to send the output, Apple sells excellent quality large displays from its stores (try to avoid ordering these online or off the page, if you can go and see one and check for dead pixels it’s better than arranging a product return); many companies offer excellent projectors and recent offerings from Toshiba and Optoma offer full high-definition compatibility. Optoma also offers a pocket projector, the Pico, which fits in the pocket and will take a feed from a portable media player. This is useful for impromptu presentations when there are no obvious facilities around, other than a wall!