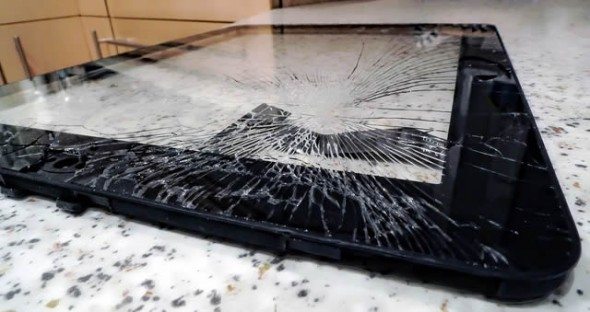 British businesses are spending more than £1billion a year on replacing electronic devices broken by clumsy staff members.  This is the startling fact from new research, by Plastic Logic, which has also found that one in four employees has accidentally damaged an electronic device at work.

Smartphones are the most likely to be broken, accounting for over sixty per cent of damaged devices. Tablet PCs fare slightly better in the workplace, making up just a tenth of accidental damage.

Most damage to devices is caused by workers accidentally dropping them – a quarter of electronic devices are broken in this way. Some 14 per cent of devices are left in pieces by clumsy workers sitting on them by mistake. Even the humble cup of tea can prove deadly with one in ten devices ceasing to work after having liquid spilt on it in the office.

Ironically, it is the IT workers and engineers who cause the most damage to their technology, with more than a quarter of people working in this sector saying they have accidentally cracked the screen of their smartphone.

Glasgow came out as having the clumsiest workers, with one in four of the city’s employees having broken an electronic device at work. Workers in Plymouth were found to be the most careful in the country – just one in ten has accidentally damaged a work device.

Liverpool’s companies were found to be the least forgiving of their clumsy workers – one in fifty firms in the city has refused to replace an employee’s device because they’ve broken so many.

Age was found to have the biggest impact on how accident prone workers are. More than half of workers aged 16 – 24 have damaged a device at work. Young workers are twice as likely to break devices as those aged 35 – 44, and three times more likely than those who are 45 or older.

On the other hand, the study found that gender has little impact on how clumsy workers are – just one percent divided men and women, with male workers slightly more accident prone than their female colleagues.

“It really is surprising how accident prone people can be with their work equipment. In today’s economic times, British businesses simply cannot afford repeated breakages of expensive electronic devices and the subsequent impact on employee productivity,” said Indro Mukerjee, CEO of Plastic Logic.

Mukerjee continued, “This research shows a clear need for work devices to become more robust and better able to survive the clumsy actions of their owners. At Plastic Logic, we’ve developed ultra-thin, ultra-lightweight, rugged displays that can be bent, dropped, trodden on, or even cut in half and still work. Our technology is ideal for replacing glass-based displays of all sizes in these apparently fragile devices. As a result, we believe that British businesses would dramatically cut the cost of clumsiness, and improve business performance and productivity.”