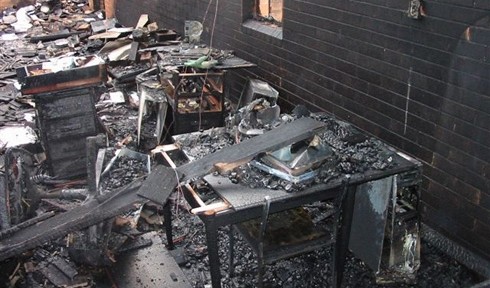 The findings show that many small businesses do not understand the importance of disaster preparedness. Half of those questioned do not have a plan in place.  Forty-one percent said that it never occurred to them to put together a plan and 40 percent stated that disaster preparedness is not a priority for them.
This lack of preparation is surprising given the risks.  Sixty-five percent of respondents live in regions susceptible to natural disasters.  In the past 12 months, the typical SME experienced 6 computer outages, with the leading causes being cyberattacks, power outages or natural disasters.
The survey revealed that the information that drives most small- and mid-sized businesses is simply not protected.  Less than half  back up their data weekly or more frequently and only 23 percent back up daily.
Respondents also reported that a disaster would cause information loss. Nearly half said they would lose at least 40 percent of their data in the event of a disaster.
Don’t Act Until After a Disaster
According to the survey findings, half of those questioned have implemented disaster preparedness plans did so after experiencing an outage and/or data loss. Fifty-two percent put together their plans within the last six months.  However, only 28 percent have actually tested their recovery plans, which is a critical component of actually being prepared for a potential disaster.
Lack of Preparedness Impacts the Business
Disasters can have a significant financial impact on SMBs. The median cost of downtime for an SMB is £78,000 per day.
Outages cause customers to leave—54 percent of small business customer respondents reported they have switched vendors due to unreliable computing systems, a 12 percent increase compared with last year’s survey.
This downtime can also put them out of business.  Also, forty-four percent of the customers surveyed stated that their suppliers have temporarily shut down due to a disaster.
Being Prepared