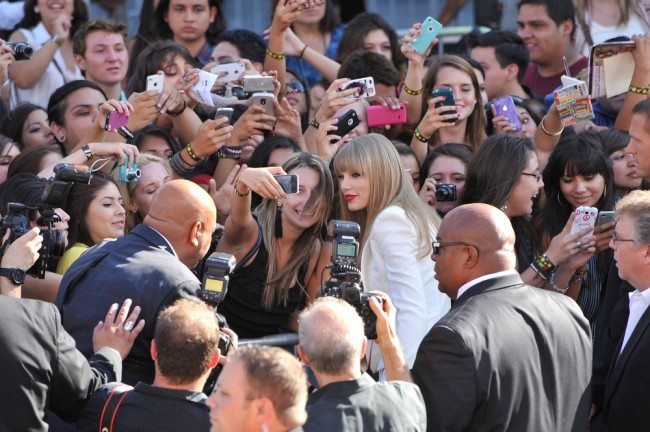 Even after very public fallouts with music services Spotify and more recently, Apple, Taylor Swift remains one of the most popular and marketable pop stars on the planet. And, with her fandom more loyal than ever, it looks as if Tay-Tay is going nowhere in a hurry. So how is it that, after rows with companies and disputes with other pop stars, Taylor Swift remained the US’s sweetheart and rose to new heights of superstardom?

With over 60 million Twitter followers and 71 million Facebook followers, it is fair to say the Swift’s social media presence is huge. However, where Taylor differs from other artists’ social media profiles is that she actually uses hers to connect with her fans. It is all too familiar to see other musicians using their Twitter page to link to press releases or to just publish tour dates. No interaction with fans and followers whatsoever. But with Taylor, her 60 million plus followers really gain an insight into the real her when they click the ‘follow’ button. Personal thoughts are shared so it’s not just the showbiz country-turned-pop singer on display. The most striking post released by Taylor was when she revealed on social media site Tumblr that her mother had been diagnosed with cancer. Without hiding behind a press release, Swift posted a heartfelt message to all her fans, which made them fall in love with her even more.

Social media is a massive part of marketing in the modern day. Obviously, being an award winning artist, Taylor Swift is no schmuck. The ‘Bad Blood’ artist has nailed the art of promoting her singles, tours and albums on social media sites. Building up to the release of her latest single ‘Bad Blood’, Taylor posted a photo dubbed ‘catastrophe’. Taylor’s timing of social media posts is exceptional, building suspense, and releasing enough information without giving anything away. It’s marketing in its simplest form, and is no surprise that record sales soared.

Swift’s popularity isn’t just recognised by her fans, either. Having teamed up for a long term partnership with Diet Coke, and with collaborations with one of Hip-Hops biggest artists Kendrick Lamar and US discount store Target, you can expect to see more and more of Taylor.

With limitless media exposure and a hyper active social media profile, it is no surprise that Taylor Swift is viewed as one of the most influential voices of the modern era. Taylor Swift’s stratospheric rise from sweet, country music star to dark, edgy pop icon highlights how easy it is for her to manipulate her image and target what her fans crave. The Taylor swift that released ‘Love Story’ as  a hit in 2008 is almost unrecognisable to the artist that released the album ‘1989’, a gritty and deep album with an uplifting undertone. With her latest album registering 1.2 million sales in the first week, there are no points for guessing which Taylor is more popular.

To sum it all up, the 25 year old singer from Pennsylvania has come a long way. Cute, innocent singles and a short lived romance with 1D boy Harry Styles are all things of the past. Now, thanks to expert marketing, Taylor Swift can begin to be recognised as a multi-platinum selling artist who is single handedly ruling the charts and the showbiz world.