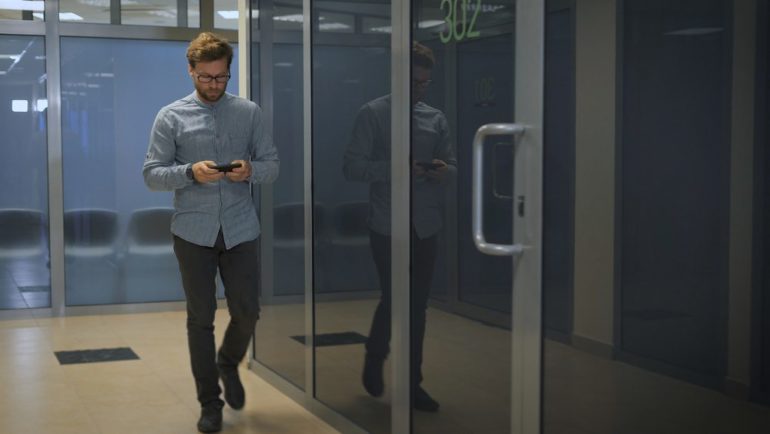 If the robust sales of Amazon Echo and Google Home are anything to go by, it looks as though 2017 could be the year that the Internet of Things begins to take off in a meaningful way.

But the smart home is just the tip of the iceberg. The Internet of Things also has profound implications for businesses across all sectors – and it could even do away with office work altogether.

In this article, we’ll ask: what would a smart office look like? How would our working lives change? And in an IoT future, will we even need offices at all?

The office of the future

Picture this: it’s Monday morning. As you approach the office, the front door recognises your smartphone and swings open automatically – no need to fumble around for keys or a fob. En route to your desk, you swing by the coffee machine, which has already prepared your favourite morning beverage (latte with a double shot – it is Monday morning, after all). You notice that coffee supplies are starting to run low, but it’s not a problem: the coffee machine has already ordered its own refills. You sit down at your desk, where your computer has booted itself up and logged you in. Your schedule for the day is up on the screen.

According to your virtual assistant, you have a big pitch with a prospective client this afternoon at 1pm – but before you turn your attention to that, you need to find Sabrina from accounts. You check the office live map and see that she’s at her desk on the third floor. After speaking with her, you add some finishing touches to your pitch, working collaboratively with an experienced colleague in the London office via video link and screen sharing.

Before you know it, it’s 12:55, and your prospect has arrived at the office. You’ve already given them clearance via their smartphone, so they let themselves in through the front door. Once you’ve exchanged pleasantries, you lead the way to the meeting room, safe in the knowledge that the previous meeting hasn’t run over – you can tell from a quick glance at your smartphone that the room is empty. As you enter, the lights switch themselves on, bathing the room with the client’s brand colours, and, thanks to the smart booking system, your presentation is already up on the projector. All you need to do now is knock the client’s socks off…

Okay, this scenario may seem a little far-fetched, but the fact is, the technology behind it already exists – and as demand for IoT tech rises and costs fall, smart offices like the one in the scenario above will start to become the norm.

The end of the office?

The smart office is an appealing prospect – but ironically, the very same technology could also end up consigning office work to the history books. Better internet speeds, improvements in VoIP (voice over internet protocol) and video conferencing technology, and the rise of cloud computing all mean that most of our work could soon be carried out from home.

In fact, home working is already on the rise. A study by the TUC to mark National Work From Home Day has revealed that the number of employees who say they normally work from home has risen by a fifth over the past decade, bringing the total to around 1.5 million people: the highest figure since records began.

So what’s all the fuss about? Well, one major boon of home working is that it does away with the hassle and expense of a daily commute. It’s probably fair to say that few workers would miss endless traffic jams and late-running commuter trains. The flexibility afforded by homeworking also makes life much simpler for parents and dog owners.

The morale-boosting effects of telecommuting are borne out by a study from employee engagement platform TINYpulse, which found that homeworkers were happier and felt more valued at work than their office-bound counterparts.

Remote working can benefit employers, too. A whopping 91% of respondents to the same TINYpulse study said that they got more work done outside of the office, which suggest that telecommuting doesn’t just make employees happier: it makes them more efficient, too.

Employers also stand to save serious money on overheads, since fewer office workers means less office space, which in turn means lower rent. They also wouldn’t have to shell out as much for things like coffee and stationery. Employers would also benefit from a decrease in lateness and absenteeism brought about by poor weather conditions or delays on public transport.

As exciting as it might be to contemplate, the future of IoT will inevitably bring some downsides, too. Cybersecurity will doubtless be one of the most pressing concerns facing us in an IoT future, since each connected device would represent a potential backdoor through which hackers could gain entry.

In a smart office where everything from the air conditioning system to the toaster is connected to the internet, the potential technical difficulties would increase by orders of magnitude – servicing an office like this would be a daunting prospect for even the most knowledgeable IT support worker.

It would also be more difficult to ensure that remote workers adhere to security guidelines, and the fact that telecommuters would more than likely be using their own devices would make security and IT issues considerably more complex. In the event of a power cut or device failure, a stay-at-home worker would essentially be marooned, with no access to IT support. Many people would also argue that video conferencing and online collaboration, no matter how sophisticated, will never beat face-to-face contact.

As with any new technology, the Internet of Things is bound to go through some degree of teething trouble; nevertheless, it also presents limitless possibilities for us to change our lives for the better, both at home and in the workplace. It’s impossible to say what the future of IoT holds – but we may not have to wait too much longer to find out.

Ross Howard is the HR Editor and IoT specialist at Insights For Professionals. He still works in the office – for now.