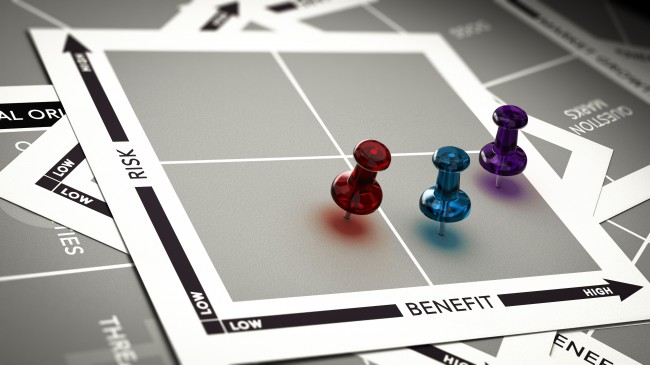 For example, Apple starts from a principle of focussing on the beauty of design. Netflix’s original programming is designed to look far more professional and polished than those on Yahoo and Hulu. Nike secures sponsorship deals with athletes that even non-sports fans can name.

But according to William Buist, founder of the exclusive xTEN Club, the tricky thing about doing what nobody else is doing is that there is probably a reason nobody else is doing it. Apple’s emphasis on design turns off a lot of hardcore techie types (at one time the only people buying computers), and Nike and Netflix are both taking big financial risks compared to their competitors.

But what’s the alternative? Stagnation, decline and disinterest on the part of your clients and customers.

Whether you’re pushing a national brand or selling in the B2B sector, the highest you’ll ever climb by playing it safe is second place. Leaders take risks; that’s how they become leaders.

However, doing what nobody else is doing, is not free. Here William Buist suggests a few of the costs that may come with putting in that extra effort:

For example, if you sell advertising space, and you want to get an edge over the competition by combining it with free data analysis, not only will you have to put in the extra money to hire people who know how to put analytics to work for your clients, you also risk losing clients who see the reports and, rather than rethink their advertising, blame you and pull out.

If nobody else is doing something, then it either hasn’t been done before, or it’s been done unsuccessfully. If it’s the latter, you’re in luck, because you can learn from your competitor’s mistakes. If it’s the former, you’re taking a bigger risk.

So, how do we address the risks and the costs of doing what nobody else is doing?

If you want to know which needs your customers feel are not being met – ask them. When reading feedback, look for trends. And don’t ignore the learning and insights you can get from other markets and skills, look out for similarities and differences and consider how they might best be applied in your markets.

2) Weigh the Costs and the Rewards

There is always the risk of failure, but we should measure risks based on whether we stand to gain more than we put in; this is the basic principal of risk and rewards.

Here are three questions to consider when deciding which extra mile you’re going to take for your customers:

– Can I comfortably swallow the costs of trying the new approach if it fails?

– Can I afford to keep delivering if it proves to be popular?

– Can I actually implement this? i.e. are my staff actually capable of it?

If you jump into something that you’re not prepared for, you may discover that the costs are steeper than you’d foreseen.

The final question is…What’s Missing? i.e. what do my customers need that they might not know they need?

If you can answer that question, you’ll be more than an entrepreneur, you’ll be an innovator.