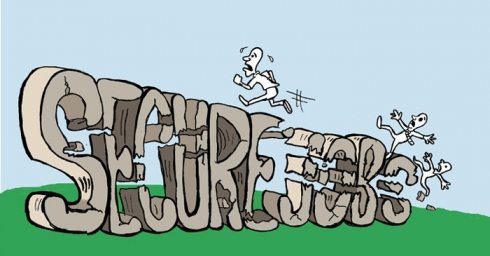 Job security – now there’s a phrase we all used to hear a lot more often.

As a little girl it’s a phrase I heard regularly. My father, latterly a talented politician and orator, felt he had wasted his potential by eschewing formal education for a life spent predominantly down a coal mine.

Unfortunately, at the end of the 1980s he – like many thousands of others – found himself unemployed and struggling to find alternative and equally well-paid work. He wanted better for his children and become militantly insistent that I stick at my studies to ensure I could, unlike him, find secure work for life.

The concept of a job for life, of course, disappeared a long time before the current economic meltdown struck.  But his much-loved ‘job security’  slogan sprung to mind again the other day, when I bumped into an old work contact.

She remarked that starting my own business in the current climate was very ‘brave’. Reading between the very thin lines, I deduced that for ‘brave’ I should read ‘stupid’. I smiled sweetly, and trotted out the line about businesses that started during recessions historically outperforming others and all that jazz.

But I’d be lying if I said that there aren’t moments – sometimes days – of self-doubt involved in starting up your own business.

Sometimes you can veer wildly from ‘Well, this is the best decision I have EVER made’ to ‘Oh lord, what was I thinking?’ and back again in a matter of seconds. Repeatedly. And that’s on a good day.

But to fear the unknown is only natural, and to paraphrase that much-loved self help book, what marks achievers out from the ‘I would but…’ types is feeling the fear and doing it anyway.

The best piece of advice I’ve received so far is from a fellow small business owner whom I respect hugely. When I confided my fears about leaving a secure and well-paid role to jump into the metaphorical unknown, he reassured me that everybody running their own business feels that way, including him after 20 years at the top of his trade.

He left me with this parting shot: self-employment and entrepreneurship is the ultimate form of job security.

“After all, when it comes down to it, there’s nobody in the world who cares more about your future and will work harder to give you financial security than yourself” he smiled.

I carry these words with me every day. They resonate when I win that big pitch I’d worried about delivering. But most of all I repeat them like a mantra on the bad days – and there are plenty of those too.

So far – three months after jumping ship from a cosy directorship at an established PR agency – I’ve learnt a lot about staying positive and focussing on my vision. The best bit – the one that excites me most – is there’s so much more yet to learn.

Something I inherited from my mother is ‘If you stop learning it’s time to move on’. And with my new baby, I’ve given myself the best opportunity to learn I could have asked for.

Just to reinforce the suspected madness insinuated by the lady I mentioned, I have started studying for a Post Graduate Certificate in Leadership. It will be a real juggling act to balance the conflicting demands of a new business with my studies (not to mention a particularly lively four year old son!) but the opportunity to learn business theory as I simultaneously put it into practice it was too good to turn down.

I hope to blog more about my learnings from the course in the future, but something from my very first session last week really inspired me and I wanted to share it.

We were talking about values in business, how to define them and shape your actions and every single communication to reflect them. That means more than just listing them on a website of course, but living and breathing them.

It struck me as I listed my values for Cake Communications that the opportunity you have as a new start up to create something special that you can truly believe in (and not just pay lip service to because it gets you a payslip every month) is a magical one. And one I’m grateful for every day.

Oh, and I’d like to share something I’ve learnt about coping with uncertainty; the trick is to surround yourself with positive people and messages. Put posters up, collate mood boards, stick post-it notes on the mirror, whatever it takes to fill you with positive thoughts and focus on your goal.

While there are plenty of people out there ready to fill you with self-doubt, there is nobody who will question you more than your own subconscious voice. Drown out the others to focus on that, and you’re well prepared for battle.