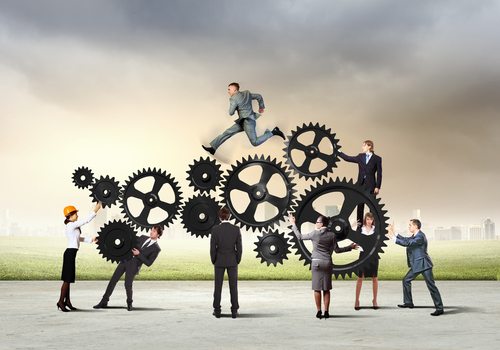 For me, seeing other people become their own boss is just as exciting as when I first did it thirty years ago.

Becoming an entrepreneur is now seen as something to aspire towards. Perhaps it is due to the uncertainty there was in the jobs market during the recession, but there are now more and more people who want to get out there and start their own businesses.

There is often a perception that business ideas can only be formed by entrepreneurs; those risk-taking mavericks who shun the corporate world. This may be true in a lot of cases. But there is another group of people who are just as capable of coming up with ideas and innovations which can help businesses grow to another level. These people are known as intrapreneurs.

They are the employees who can make a difference to a business simply because of the way they think. They may not have the typical entrepreneurial personality but their ability to read the market, think outside of the box and potentially transform a sector makes them a valuable asset to any company.

About 15 years ago when I was running my first business Alexander Mann, one of my employees, Rosaleen Blair, spotted an opportunity in the recruitment market and came to me wanting to start her own division. To a lot of people she may not have been an obvious candidate to back, but the idea she had, which was to offer outsourced recruitment solutions, was a bit of an industry game-changer. The more she spoke to me, the more her creativity and passion stood out. I decided to back her, and not only did she make a huge success out of it, she brought something completely new to the recruitment sector.

Another example is the creation of one of the most well-known products in the world – the PlayStation. The console was not the idea of a big R&D team with a huge budget; it was the creation of an employee working on his own initiative.

Ken Kutaragi was a Sony employee who realised the potential of the video game industry, something the company considered a waste of time. He went through various ups and downs, including having to work in secret with Nintendo and almost losing his job. Fortunately the CEO of Sony saw something in him and his idea. Eventually the PlayStation was released and it is now one of the best-selling gadgets of all time, having produced phenomenal results for Sony.

I believe every organisation has a Rosaleen or Ken within it; the key is for the senior management to spot their talent and give them the platform to put forward ideas.

I have spoken before about the need to create a good culture within your business. There shouldn’t be an environment where creativity is stifled. Everybody, no matter what their level of seniority, should be encouraged to contribute to the strategy of the company.

You may even want to set aside a time and place where people can get together and specifically discuss new ideas. It can be quite useful for them to have some time from the daily operations to get their creative juices flowing.

Business owners should always be aware of the talent and innovation that may be lurking within their own organisation. Intrapreneurs have this unique ability to work within the structure of an organisation, whilst also thinking outside of the box. If you are open to their ideas, then you may just find your business moving onto another level.

James Caan CBE is one of the UK’s most successful entrepreneurs. He made his fortune through the global success of his Recruitment companies, Alexander Mann and Humana International, before founding private equity firm Hamilton Bradshaw in 2004. He is best known for joining the panel of the hit BBC show Dragons’ Den, and more recently, The Business Class on CNBC. A passionate supporter of small businesses, James chairs the Government’s Start Up Loans scheme, which provides funding and mentoring to budding entrepreneurs.
View all posts

James Caan CBE is one of the UK’s most successful entrepreneurs. He made his fortune through the global success of his Recruitment companies, Alexander Mann and Humana International, before founding private equity firm Hamilton Bradshaw in 2004. He is best known for joining the panel of the hit BBC show Dragons’ Den, and more recently, The Business Class on CNBC. A passionate supporter of small businesses, James chairs the Government’s Start Up Loans scheme, which provides funding and mentoring to budding entrepreneurs.