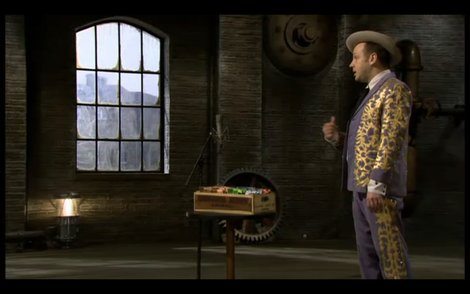 Before this evening I wouldn’t have believed that you could walk in to a room in a purple and gold, rhinestone encrusted suit,sing “Put that jerky in your mouth, mouth, mouth,” and then not only ask for money and get it, but collect an extra bonus payment of £12,500 on your way out… Not anywhere legal at any rate.

Well beef jerky touting, Texan cowboy Joe Walters managed to strike such a chord with ‘Impenetrable Pete’ (Peter Jones), that he did just that – despite Jones’ initial exclamations that Joe looked like “someone out of Toy Story” and that this was “the most surreal moment of his life”.

Now whilst personally I’d rather eat the eyeball of a small mammal than consume beefy jerky, you’ve got to admire Joe’s rhinestones, so to speak. He knew his market, his competition and, he walked into the Den with another investor already in place – James Watts (BrewDog) – who had apparently said he’d match any offer a Dragon made.

A rare moment was made rarer by Joe negotiating with Jones, his fourth Dragon offer of the evening. In terms of viewer support, it’s just as well they saved the singing Stetson wearer for the finale as the other contestants would never have stood a chance and we all would have switched off because realistically, how was it going to get any better (read madder) than that?

The Mancunian product designer started well with great British spirit and a hand-crafted, traditionally book-bound case for an iPad – I loved the fact he brought Norman the Book Binder to the Den with him. Unfortunately it all, rather literally, fell apart when it became obvious that in three seconds of product testing, it didn’t quite work – and by that, I mean the iPad fell out. Troublesome at the best of times but, for the innovative high school teacher come product designer smack in the middle of the Den, it was a bit of an unmitigated disaster. He was dismissed like a chastised child and told to “go back to the drawing board”. Luckily I think you waive your dignity in a disclaimer you sign at the start of the show, so the poor chap didn’t have that to lose.

The bloke that wanted buy-in for his ‘Dry Line’ had clearly dismissed his dignity years ago when he developed what was basically a large umbrella for drying clothes – a cover that fitted over a rotary washing line. Kelly Hoppen said she thought she would “lose the will to live” but I just felt for the guy who had spent five years developing an umbrella so you could hang your clothes out to dry in the rain without them getting [that] wet – I think he reminded me a little too much of an [alleged] inventor relative for me to mock him.

I quite liked the husband and wife team that wanted to take away your baby’s used nappies and recycle them into decking and garden furniture for the price of a latte. I warmed to the twosome partly because they seemed to know what they were talking about, partly because they steered in a trolley full of waste nappies to show what a trolley full of waste nappies looked like, and the other part was that, frankly, as a mother of twins, the concept sounded appealing. If they’d collected the nappies from me during the first two years, the chances are they’d have been offered a couple of children to go along with them most days. Sadly though, despite their eco-credentials, there would be no ‘going green’ for the Dragons.

Fitness instructor and business bombshell Donna from Newcastle walked away with a Dragon under each arm and a tear in her eye, with the investment based more on her as a person than her confusing-because-I-didn’t-understand-why-you-would-want-it, generic outdoor exercise and yoga mat. Granted you could wear it round your waist but you can wear a rucksack round your shoulders too and stick a mat in that. But what do I know? Apparently about as much as the duo that presented a vivacious Latino Dance Troupe and tantalised the Dragons with their dancing, but not so much their business plan, when the two introduced their ‘Rio – a taste of Brazil cooking sauces’. Told quite firmly by Deborah Meaden that although she liked the tastes, “£50,000 isn’t going to touch it, you would need £5m,” and the door closed on the Den.

So our clear contender of the evening is the prospect of a new UK Beef Jerky market leader, that may, or may not, be eccentrically dressed and singing when he rides his investor stallions into town. But the TV show is never the end of the story, proven by the fact that as the credits began the news travelled through the Twitter verse and beyond that ‘Impenetrable Pete’ and ‘Gemstone Joe’ hadn’t said much more than a ‘Howdy’ to each other, and had since parted ways. I wouldn’t worry about Joe though, his brand of beef jerky will be stocked across the UK as of tomorrow, courtesy of his other big investor, James Watt of BrewDog.

Joe, your gigantic Stetson hides a real nose for big business beef, my hat’s off to you. Saddle up Britain, it’s going to be a Jerky ride.