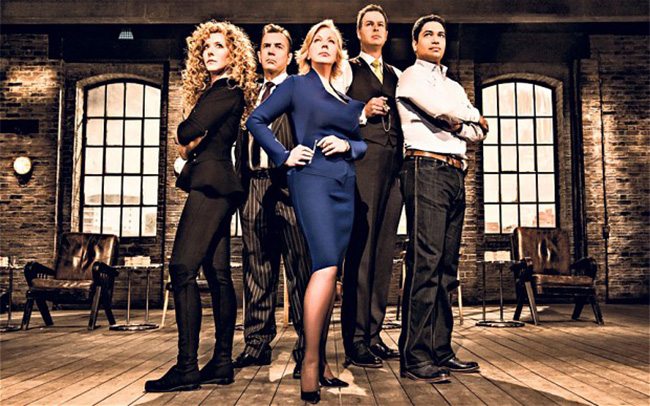 Making a comeback with a previously successful brand, episode 8 brought to us Angela and her daughter Jessica. When Jessica was a small child, Angela launched Baggers Originals, the childrenswear for wet weather with a built in pouch that allows the garment to fold into itself and reduce mess. However Angela’s business snowballed out of control quickly and soon ceased trading, and years later, again with her daughter as inspiration, Angela relaunched Baggers Originals. With their healthy finances and deals already in place with Monsoon, Angela and Jessica impressed the Dragons. Deborah offered half of the requested investment for 15 per cent equity, which Peter then matched, and the ladies left the Den in an even stronger position than when they entered.

Entering the Den in episode 10 with a new twist on a classic treat, Yee Kwan gave the Dragons a taste of something new. Whilst Duncan wasn’t so keen on the black sesame seed ice cream, or the green tea matcha or lychee flavours, Peter polished off three tubs, and the rest of the Dragons seemed to like the product. As discussion progressed around how difficult it is to get a business like this off of the ground, Yee Kwan brought up retailers already stocking her products and her plans to progress. Eventually Kelly offered the full amount of £50,000 in exchange for 35 per cent of the business – 15 per cent more than Yee Kwan intended to give up. Deborah then also offered £50,000, but asked for 30 per cent. After much backwards and forwards in which Deborah refused to explain why she would be a beneficial investor, Kelly gave straight answers. But even despite this, the difference in equity swung the deal for Yee Kwan and she chose to accept Deborah’s offer.

Bringing online shopping into our social media obsessed culture, Cally arrived in the Den with a creative solution. Mallzee is a shopping app that works like Tinder – suggestions are given to the user and they swipe it left or right depending on whether they like or dislike it. The software then learns the likes of the user and chooses recommendations based on this, and allows for sharing with friends via chat.

Kelly may have been right in saying that this will not replace the experience of browsing the shops, however this has been true of online shopping for years and has not diminished its success. Mallzee could trump the way we online shop as it draws from many different retailers, and users will know that they can just browse the things they like without having to look for something specific. It could be an app to use for fun, and the software’s ability to show the user what they like will more than likely lead to more purchases.

Cally asked for £75,000 in exchange for 5 per cent of the business. Peter offered this full amount, however he requested 20 per cent, dropping to 15 per cent once he made his return. Cally however had other plans, and left the Den after declining the only offer made to him.

With one of the most niche products to be successful in the Den, John and Sam pitched their invention Seabung to the Dragons, a device that allows for valves and seacocks on boats to be repaired without taking the boat off of the water. Cutting out the most time consuming and inconvenient part of the process is an advantage for all boat owners, and the benefits of Seabung kept on coming. John and Sam also claimed that this product would be incredibly useful in emergency situations, and were attempting to have legislation changed so that all boats will have Seabung on board as a mandatory item.

With a very smart product that has the potential to make a huge profit, the Dragons climbed on board. Both Kelly and Deborah offered half of the requested money in exchange for 10 per cent equity, and their partnership was accepted by John and Sam.

Last of the best from the second half of series 12 is here not because of the stumbling and awkward pitch, not because of Neomi’s apparently minimal knowledge of business, and not because she received no offers. In fact these reasons meant that this pitch could have also been one of the worst.

However, Neo-Slip, as invented by Neomi, is a small piece of fabric that aids the use of anti-embolism stockings. As a nurse, Neomi has experience of how difficult these stockings are to wear, how this difficulty causes patients to not bother with them, and how this can be fatal. Neo-Slip is a product that really works and is a solution to a big problem, and Neomi deserves credit for this invention. We can only hope that Neo-Slip is picked up by the NHS as Neomi suggested and will help to save lives.

Kicking off the second half of the series with a complete eye-sore were three young gentlemen wearing leggings. Freedom of expression may be one thing, and anyone can choose to wear whatever they like, however the biggest issue with this product is that leggings are not a replacement for trousers. This along with the fact that the designs pitched looked absolutely ridiculous, it was no surprise that the Dragons weren’t interested.

Charlie Anderson came into the Den with a novel gift idea – personalised caricatures. Whilst this isn’t a particularly new idea, the innovation within Charlie’s business was his £140 RRP. Needless to say that this is far too much for a gimmicky gift that nobody would really want to have on their wall, and considering the time and money going into creating these caricatures, the investment was simply not worth it, and no offers were made.

In episode 9, Ryan walked into the Den looking for £150,000 for 11 per cent of his electric toothbrush business. With seemingly no dental background whatsoever, the only unique selling point Ryan had to offer was that these toothbrushes came in a variety of designs. It’s baffling to think that anybody would buy a toothbrush based on how it looks, and Ryan had no previous sales to show that anybody was interested in purchasing a fancy looking, £99.99 toothbrush. It’s fairly clear that this business is not going to compete with the market leaders, and none of the Dragons wanted to be a part of it.

A man with a solution to an incredibly specific problem arrived in the Den with his piracy prevention system in episode 10. Michael showed his contraption to the Dragons, demonstrating how the radar and satellite features pinpoint potential attackers and will release drones to prevent pirate attacks out on the water. However with the existence already of even more advanced technology, and the risk of mistaking other sailors for attackers, the Dragons withdrew from investing any money, but not before Deborah told Michael that he is stubborn and would be impossible to work with.

The last of the worst pitches and products is Andrew and Gary’s teeny tiny pen that fits in the headphone socket of a smartphone. The fragility of the product was demonstrated by Piers, and the fact that you could lose this tiny pen extremely quickly and be back to square one again was pointed out by Kelly. When including these points alongside the fact that such a tiny pen would be so awkward to the point where it would be more convenient to find a normal pen, it’s no surprise at all that the Dragons sent Andrew and Gary away with nothing.

So this brings us to the end of series 12 of Dragons’ Den, and also to the end of an era on the show. Concluding the series on his final ever investment, Duncan Bannatyne left the Den for good. Whether the Den will be the same in the future remains to be seen, but we will be welcoming some new Dragons for series 13, and no doubt some more brilliant and ridiculous pitches.

Cara Lack will be joining us each week to take us through the good, bad and ugly pitches of the season.
View all posts

Cara Lack will be joining us each week to take us through the good, bad and ugly pitches of the season.