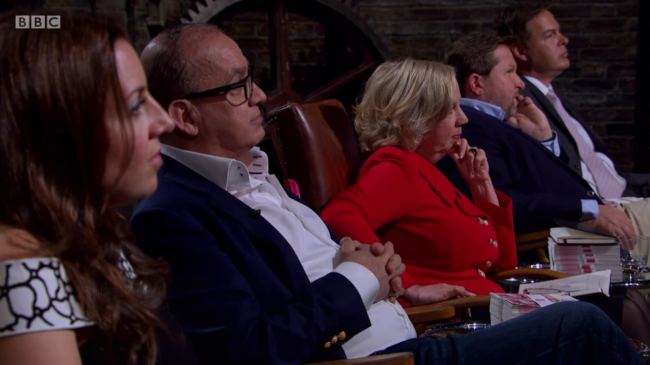 First to enter the den tonight was a very confident budding entrepreneur, Steven. He was asking for a £100,000 investment in exchange for a 15 per cent equity stake in his business ‘MicroFitness’ which essentially helps to tackle childhood obesity by offering a range of activities into schools and sports centres.

The activities are quite varied, from yoga to martial arts, to archery and zorbing, – even the Dragons trialled a few of them as we watched Deborah sneakily shoot her harmless arrow at Peter and chuckled at Nick as he struggled out of the zorb he’d managed to squeeze himself into.

After the Dragons’ playtime was over, the den got a whole lot more serious.

Generally it seemed like a good pitch, confident and smooth, with Dragons loving the promotion of healthier, fitter and more active children.

However, if there’s one thing in the den that will get picked up on, it’s the figures.

The profits Steven proposed were promising but definitely questionable. Despite having to face Peter’s tackling questions regarding Steven’s supposedly ‘unrealistic’ figures, the budding entrepreneur was clearly trying to remain confident.

With the figures being such a key factor of what investors will look at, they just didn’t add up to success for the Dragons, who all declared themselves ‘out’.

Matthew was next to enter the den with his ‘Autoblaze system’, asking for £150,000 investment in exchange for a 15 per cent share.

The product is fundamentally a unit that is fitted onto the back of your fire stove, which uses a fan to blow hot air into your stove and cause the fire to start up without you doing it yourself. To activate the fan, you use a remote control, but what is the point?

Apart from the fact that it’s apparently more eco-friendly and prevents smoke coming into the home that is released from the stove when initially igniting it, I can’t see much point in this product at all.

Furthermore, alongside the fact that they are sold to stove manufacturers, means that the likelihood of a customer willing to pay an extra £500 for an ‘Autoblaze’ to be fitted with their stove is pretty unlikely – just for the mere reason of not having to physically start the fire yourself.

One thing that Matthew doesn’t seem to have taken into consideration is the fondness that people take with their stoves. There are a huge amount of people who own one as they like to initiate and control their fire and this product takes that aspect away from them.

The pitch began to decline further as the value of £1 million had no justification whatsoever, and after Deborah tried to retrieve figures from Matthew, it was clear that there was more chance of getting blood out of a stone.

With a lack of innovation, potential and burning passion, Matthew left the den with nothing but advice.

Also entering the den tonight was Falu, with ‘Howdah’. The Indian snack business was hoping to receive a £100,000 investment in exchange for a 17.5 per cent equity stake.

After Sarah picked up on the fact that not all supermarkets have a ‘world food’ aisle, it was becoming difficult to see this product in a place that anyone can buy it unless it somehow made it into the mainstream sections.

I personally think this would have quite a niche audience buying it, perhaps people with Indian heritage or people who enjoy Indian food, or people who would like to try something different to the conventionally-flavoured snack that already exist – either way, not a guaranteed, stable sell.

After a collective view of not being able to make a return on this investment, the Dragons all decided to decline making a contribution to the business.

As I’ve said before, the structure of the last few episodes have been extremely predictable. Maybe there were not many successful investments throughout this series and producers struggled to work out an effective ordering of pitches, but the extent of how likely a pitch is going to be successful or not, it becoming a ruining factor of the programme in my opinion.

You are pretty much guaranteed a successful pitch at the end and fair enough, but there always tends to be unsuccessful pitches for the rest of the beginning of the programme – ones that don’t even include an offer even if it is rejected, so, as a viewer you are sat waiting for the end to witness the best part – but in a way, I suppose that’s the idea.

John was last to enter the den tonight, with his bespoke social and dating app business. He wanted an £80,000 investment in exchange for a 15 per cent equity stake.

With apps such as ‘Bristler’ which manages to match people who have beards with those who like beards – pretty odd but seems to work, and ‘Bump’ which takes a more entirely social objective rather than dating, allowing expectant mums to interact, the business seems like a promising one.

With an answer for literally everything that was thrown his way, John managed to receive great praise from all Dragons and in-particular Peter who stated him for being “one of the most appealing people to invest in”.

After all Dragons opting to offer, with all very similar deals on the table, John had a big decision to make. Eventually, after pondering about the den with his notebook, John had made up his mind.

Nick and Peter were his new investors, accepting a collective £80,000 investment, giving up a 20 per cent share of his business. What a triumph!