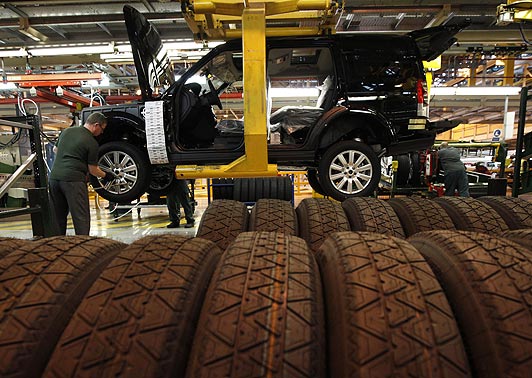 Economically, it is good news on a number of fronts if companies like Jaguar Land Rover do well.

It can help rebalance the UK economy by increasing our manufacturing output and our exports. As we’ve heard today, it can also create high quality jobs, and send a message to the world that at least some British workers have the skills to compete on a global stage.

But we shouldn’t be under too many illusions: even if manufacturing companies like Jaguar can help increase UK exports, many economists doubt they can be a major source of new jobs over the long term, says The BBC.

Why? Because to succeed in the global manufacturing industry, you have to be extraordinarily efficient. That means employing fewer and fewer people to make the same amount of stuff.

Shrinking employment
There are now around 145,000 people working directly for UK car manufacturers. That is barely 0.5% of the workforce, but between them they produce around 11% of Britain’s exports (plus a lot of cars and engines for the domestic market as well). Around 80% of cars produced in the UK are exported.

That’s because most UK companies would have to shed workers to produce as much value added, per employee, as the car industry does today.

Higher productivity does not have to mean fewer jobs, if demand is going up at the same time.

But world-beating manufacturers are so productive, most economists think we would be lucky to see the total number of UK manufacturing jobs go up over the next few years, even if the economy does rebalance, and we achieve rising manufacturing exports.

In fact, even stable employment in this sector would be a big break with the past. The number working in manufacturing fell by another 1.4 million between 2000 and 2010. That’s 10 years in which the number of jobs across the economy rose by more than 1.7 million.

Manufacturing has been doing a bit better since the financial crisis, and the arrival of a more competitive currency, but of the nearly 560,000 jobs created since the summer of 2010, only 26,000 (5%) have been in this part of the economy.

Exciting spin-offs
Of course, there are lots of other jobs – in retailing and other parts of the economy – which dependent on those manufacturing companies.

The SMMT estimates there were 737,000 jobs, across the economy, that were dependent in one way or another on the automotive sector in 2010 (the most recent year we have detailed figures for).

The value of UK automotive exports rose 22% between 2005 and 2010 – from £23.7bn to £29bn in 2010. Total output in this sector rose by a similar amount. Despite that, employment fell. You could produce similar statistics for nearly all of the most successful manufacturers in the UK.

As I said at the start, it’s great news if car companies – and other manufacturers – are making and selling more in the UK. Their success can produce a lot of positive spin-offs for local economies, and for the country as a whole. It can also produce highly valuable skilled jobs.

But, even with exciting modern developments such as 3D printing, it is difficult to believe we will see a big rise in UK manufacturing employment over the next few years – even if we do see that long-awaited rebalancing, and exports and output take off.

The lesson of the UK car industry is that you can do very well indeed in the global economy without employing very many people at all.