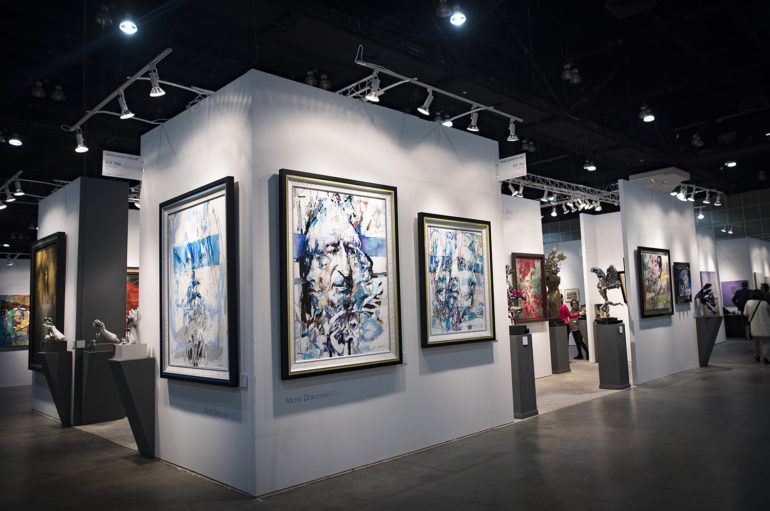 For a generation the UK has been able to hold its ground in the global art market through a combination of expertise, competitive costs and a comparatively benign regulatory and fiscal environment.

Currently the UK is behind the US and just ahead of China in volume of art sales. But its market share is falling say Barnebys and Brexit may well lead to a loss of its powerful position.

There are signs of snow in the air for the UK art market. The influential art auction search engine, Barnebys which lists one million objects on any one day with 3,000 auction houses globally notes that Britain’s share of the art market is falling, down almost 10 per cent over the past year.

Pontus Silfverstolpe, co-founder of Barnebys, says: “Will Britain’s art market survive Brexit? The question and the art market hangs in the balance. The right decisions on facilitating trade may just boost Britain’s position, the wrong decisions will see the global art market becoming a two base hub – New York and Hong Kong – with Britain’s once flourishing art market just another part of Britain’s colourful history.”

“The US market saw strong growth of 4 per cent in 2016 while other regions declined. The US total share of the art market was $27.3 billion. The Chinese market dropped with sale down 23 per cent to a total of $11.b billion. While the UK dropped a staggering 9 per cent to $13.5 billion. The UK still ranks in second place to the US and had a 21 per cent share of the global art market. China was close behind accounting for 19 per cent.”

It may be that the overall global market decline has masked any Brexit effect that might or might not have taken place.

Barnebys is increasingly the online art platform chosen by anyone interested in tracking down a work of art, an antique, a design icon for sale in the world’s auction houses. It is often called the Google of the art world.

Because of its massive database of goods moving through the art world it can track trends as few others can and is sensitive to market movements.

Pontus Silfverstolpe, shares his thoughts on Brexit’s impact on the UK’s art market. “Currently the UK enjoys a pre-eminent position in Europe as the place that most of the art market action takes place. This is because it is home to all four of the giant international auction houses – Sotheby’s, Christie’s, Bonhams and Phillips and most of the major league art galleries have a presence here. New York and Hong Kong are the competition. London is where so many of the wealthy have first or second homes. It is a comfortable place to do business. The City and its financial institutions are on hand to help fund major art purchases, the legal and accounting infrastructure is here to facilitate the setting up of arts trusts, family trusts and other legal and accounting services needed to move art around the world. And everyone speaks English, still the world’s leading trade language.”

Will these stunning advantages that London currently enjoys survive the four horsemen of the Brexit Apocalypse? Leaving the Single Market, leaving the Customs Union, ending of Freedom of Movement within the EU and the increasing loss of financial services to other European centres hungry for a slice of this action.

Artist’s Resale Right refers to the levy charged on the sale of works done by living artists or those artists who have died within the last 70 years. Currently London is a signatory to this tax which means that often sellers will go elsewhere, to New York for example where they don’t have to pay this tax to artists or the estates of artists. If London is free of the EU and it drops this tax it could benefit the art trade in the UK.

The UK currently has a discounted import VAT rate of 5 per cent, which is the lowest in the EU, thereby making it the most competitive EU member state when it comes to imports from outside the EU. Obviously, if we leave the EU and customs union, while we can keep the rate, so our own imports won’t be affected, we will lose the advantage of importing art cheaply into the EU to pass on to buyers in other countries and that business could instead go to places like Brussels and Paris, where discounted rates are not quite as low but still good.

And currently UK based art dealers and auction houses can move around the EU with no problem and no taxes or import duties and no time consuming paperwork or bureaucracy.

Freedom of movement around the EU:

London’s leading art market position in Europe is dependent to large part on the ease with which people from the EU can work in the UK, and vice versa. Most art professionals believe that freedom of movement for those in the art world is the single most important aspect to London’s current dominance.

Anthony Browne, chairman of the British Art Market Federation says: “The art market has been a British success story. Brexit presents new opportunities to build on this. After short term anxieties, it was business as usual, with the Masterpiece Fair in London attracting 37,000 visitors and a Rubens work selling at auction for almost £45 million within days of the referendum. There is no reason why the UK should not continue to compete, provided that opportunities offered by Brexit are grasped.”

He believes that now is the time to eliminate or reduce the regulatory burdens that have piled up over recent decades, adding costs and compromising London’s competitive position as against its principal rivals: New York, Hong Kong and Switzerland’s art trade centres. As the market here is mainly made up of small businesses, a reduction in those costs would have a wide impact.

He says: “Besides directly employing more than 40,000 people, the UK art market helps to support a further 100,000 jobs through its expenditure on ancillary services. Art fairs – Frieze, for example, which pulls in thousands of international visitors each October – and auction sales make a cultural as well as commercial contribution to the UK, attracting great works that might not otherwise be seen here.”

Freedom of movement really is the BIG one. If there is a massive increase in paperwork and delays at borders because customs can’t cope, that will have a major effect on the UK. This would probably affect the UK’s entrepôt status (a port where goods for import or export can be stored without paying import duties).

On the other hand, the UK’s access to the biggest global markets (US, Hong Kong and Switzerland) should be easier, so it could be a matter of swings and roundabouts, especially as the UK art market is as big as all the rest of the EU put together.