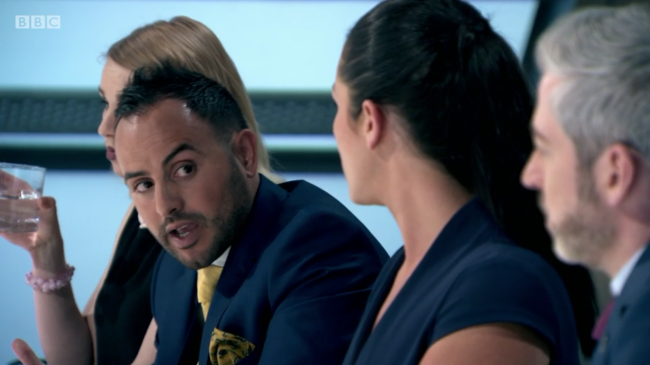 7am – as a frequent viewer, you’d know that by this time the candidates would have had a phone call by then, but not this week.

As candidates lounged in their nightwear and comfy clothes, the doorbell rang and outside stood Karren and Claude – slightly unexpected! The candidates were gathered in a room in the house to visit the virtual boardroom where Lord Sugar presented their task. Wearing the virtual headsets, candidates were presented with the proposal of having to design a new virtual reality game.

Trishna was appointed project manager for team Nebula in hope to earn herself a win and Sofiane became project manager for Titans, which caused a slight stir within the group. Dillon was clearly very gutted about this election, who declared his expertise and skills in creativity and design would set him in good place for project manager but of course, Sofiane pushed for his role and got what he wanted.

Sofiane then had to make the decision of how he was to split the teams. Obviously, if you have two experts in branding you’d set them off to brand the product, right? But, no! Sofiane likes to do things his own way and placed himself and Grainne in the branding side and sent Dillon and Alana off to create the game.

Meanwhile, Courtney and Grainne were sent to brand the game for Nebula. They generated the idea of a game in space and a character loosing their pet – in this case a badger. It was quite humorous seeing the reaction from the other side of the phone when Grainne and Courtney presented their ‘Gordon’s lost his badger’ game idea. Yes, it was very random and if I’m honest, I like to question how much creativity and thought really went into that name?

Jessica and Courtney enjoy each others company too much. – to the extent that they distract each other and spiral off onto other ideas or loose focus on the task they are to be carrying out. I can’t be the only one thinking maybe they get on a bit too well?

As Trishna and Frances review the branding sent over from Jessica and Courtney they were not half-impressed with the results. Their main concern was that the game was called Galactic Gordon’s Lost His Badger, but in the branding there was no featuring of Gordon just the ‘astro badger’. Gordon is in the name, so you’d expect for him to be shown and predictably this were to be questioned in the pitch.

Team Titans’ game was Magic Shells, an underwater puzzle-based game. ‘Magic Shells’ was not the most imaginative name in the world but the branding actually looked quite good.

After presenting the games at Comicon, there were mixed reviews. Magic Shells was coming across for being more for a younger audience and Galactic Gordon’s Lost His Badger was found to be unclear for users as to what they have to do in the game.

During the pitches to an audience of experts and enthusiasts, team Nebula faced expected questions on the lack of feature of Gordon and also the long-winded name. However, this was only a small hurdle faced when in comparison to team Titans’ pitch.

The pitch for Magic Shells was very messy and unprofessional. First of all Sofiane caused a fluster within the group’s plan for the pitch as, once again, he began doing his own thing. Grainne demonstrated the game in possibly the worst way and awkward silences were present, but actually overall the audience seemed to like it.

Th candidates located back to the real boardroom to hear about the votes and comments from experts and the public on their games.

Jessica was graced on her pitching engagement skills and she has become my new prediction to win – which is surprising since I couldn’t stand her at the beginning of the process. Although there can be times where she gets a little excited and can sometimes find it hard to control what she says and does, she is actually very smart and nearly always receives good feedback from external individuals faced within tasks. I think she could be a dark horse and so this is why I think since my prediction to win, Paul, was fired last week, Jessica is my new prediction.

The more Sofiane spoke in the boardroom, the more tempted I was to change the channel. Though, I was satisfied to hear him for once admit his mistake in the pitch by leading the team off track by doing his own thing.

Nebula not only gained favour from the experts, but also 222 out of 300 votes from the public.

After much bickering in the boardroom, Sofiane brought back Grainne and Dillon with him.

At this point I was urging for Lord Sugar to widen his eyes to the lack of potential that sat infront of him and to see that Sofiane needed to go. He always does his own thing, doesn’t like to follow others and cannot even stick to his own plans but Lord Sugar, although stated him for being a very nice guy, fired Dillon.

Although I was slightly in shock because I thought Sofiane would go, I didn’t give up hope as the background soundtrack was still rolling, inferring of a second firing.

When returning to the house, Grainne faced the candidates who were convinced that Dillon would walk through any minute but no, he was gone for good.