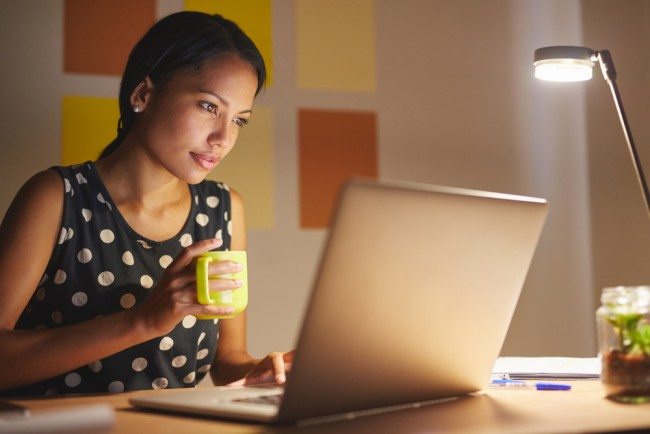 Every time I hear all the benefits of being an early bird and how, in order to be truly successful, you have to rise with the sun (and the birds), it makes me cringe, says Peter Economy for inc. I am a night owl–my best and most productive time begins when your typical early riser is nodding off.

Why fight nature? After all, studies have proven that us night owls were born this way–it’s genetic and biological. So for all you night owls out there, here are 11 great reasons to embrace your late night productivity habits, trust your internal clock, and ignore all those naysayers.

1. You find peace and tranquility

I get far more done at night than at any other time of my day, even on those days when I rise early. I am not bombarded with questions, emails, texts, phone calls, or social media, and can actually concentrate without interruption for hours on end.

2. More than likely, you are a workhorse

A study at the University of Liege in Belgium found that night owls remain mentally alert for a much longer period of time after waking than do their early bird counterparts.

3. You will always have time for happy hour

Night owls can and do say yes to a nighttime social life because they know that once they return home, they will still have several hours of productive time left before needing some sleep.

4. You are more likely to be entrepreneurial

According to the University of Chicago, night owls have a higher propensity for risk taking and have the makings for becoming successful entrepreneurs.

5. You are probably stronger

Studies prove that night owls show an increase in motor cortex and spinal cord excitability in the late evening hours. This is another good reason to buck tradition once again and exercise at night instead of in the morning. If you’re like me, mornings are not the time to bench press a crazy amount of weight over your head.

There are no appointments or meetings scheduled in the middle of the night so you are free to work and play and work some more–providing massive flexibility.

7. You are more likely to be creative

Researchers at a university in Milan have noted a spike in creativity among night owls, noting that they are much more likely to come up with outside-the-box solutions than their early bird counterparts.

8. You tend to be much more relaxed

According to British researchers, early risers typically have higher levels of the stress hormone cortisol, and these high levels stick around all day. This is not the case for night owls. They don’t receive that same level of early morning cortisol injection and stay relatively calm all day.

9. You just may have a higher IQ

Researcher Satoshi Kanazawa found that highly intelligent children tend to become nocturnal adults who prefer to stay up late at night and sleep-in seven days a week. Yet another study at the University of Madrid found that night owls tested higher in general intelligence and even earned higher incomes than early birds.

10. You can catch up on the World Wide Web

If the early bird catches the worm, then night owls catch a quiet, peaceful Internet. You get a chance to catch up on all the latest news and articles without dozens of other updates happening simultaneously or having the need to check back periodically for additional updates.

If night owls could always follow their biological desire to stay up late, all would be perfect in their world. The reality is, a lot of night owls have a job that requires them to be at work during early bird hours. The good news is that night owls find it far easier to wake early and be productive compared to early risers, who often find it extremely difficult to pass their usual bedtime hour and stay up later.