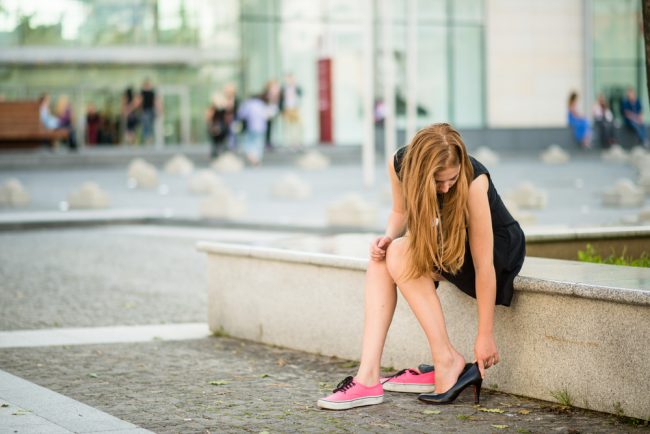 A receptionist revealed her astonishment yesterday at being ordered home from one of Britain’s biggest finance companies because she refused to wear high heels. Nicola Thorp, 27, spoke to The Times saying that she had been told that a 2in to 4in elevation was obligatory to work as a receptionist at PwC.

“Sexism in the city is a good little soundbite,” she said. “I just think it is crazy. It is gender stereotyping and there is a sexual element to it. I wear heels on a night out but that is my choice. Wearing flats would not impair my ability to do my job.”

Ms Thorp, an actress who has appeared in Doctor Who, was sent to PwC’s offices last December by an employment agency.

The supervisor, who worked for the outsourcing company Portico, which supplies PwC’s “front of house” services, ordered her to buy a pair of high heels.

Ms Thorp said that she had been laughed at when she complained that male colleagues were not being asked to do the same. She was then sent home without pay.

She has launched a petition urging parliament to make it illegal for women to be required to wear high heels at work. Tens of thousands of people have already signed it.

Portico, which boasts that it provides “front-of-house” services to “big banks, top accountancy firms, lawyers, trendy media folk” said that it was reviewing its “recommendations for appropriate style of footwear”.

PwC said that it was “in discussion with Portico about reviewing the detail of their uniform guidelines”. It did not comment on whether it had been aware of Portico’s “female grooming policy”.

Melanie Stark, a sales assistant in Harrods, claimed that she had been driven out of her job after refusing to wear make-up. The dress code stated “base, blusher, full eyes (not too heavy), lipstick, liner and gloss are worn at all time and maintained discreetly”.

El Al, the Israeli airline, ordered its female flight attendants to wear high heels at all times until take-off

British Airways attempted to force new female cabin crew to wear skirts in 2014. Existing staff had been given permission to wear trousers in 2004

UBS, the Swiss banking group, issued a dress code instructing its female employees that they had to wear flesh-coloured bras beneath white shirts

The revelations prompted an outcry. Rebecca Hilsenrath, chief executive of the Equality and Human Rights Commission, said that it was “baffling there are still some companies that are practising this sort of outdated sexism”.

She added that unless “equally stringent requirements” were applied to male workers “it is likely that a requirement to wear two-inch heels would constitute unlawful discrimination”.

Baroness Burt of Solihull, business spokeswoman for the Liberal Democrats, asked “why should women be made to look stupid”.

She added: “If companies are going to stipulate a trivial item of clothing, perhaps they should demand brogues or a bowler hat for men.”

Ms Thorp’s petition has prompted similar allegations against other companies. She and a respondent to her petition said that they had been ordered several years ago to wear high heels at Harrods. The company said that its dress policy stipulated “black structured heel shoes” which included smart, flat shoes. It is understood that “completely flat shoes” are prohibited.

Ms Thorp said that it was unfair to expect her to do a nine-hour shift “on my feet escorting clients” while wearing heels.

A number of studies have shown that prolonged high heel use can damage ligaments and nerves in the ankle, leading to problems in the legs and back.

Ms Thorp said that apart from the health problems it was also sexist. “Dress codes should reflect society and nowadays women can be smart and formal and wear flat shoes,” she said.