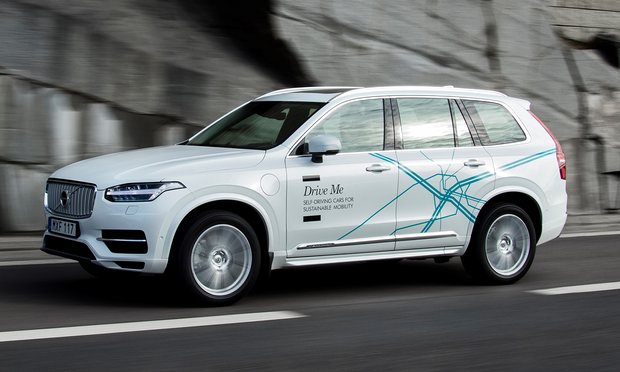 The Swedish carmaker said it was aiming to make operating self-driving cars as easy as using a smartphone.

The Telegraph reports that the Drive Me trial in London will initially see engineers behind the wheel of Volvo’s self-driving XC90 in coming weeks, with the carmaker planning to start selling the vehicle in 2020/21. The 4×4 cars have already taken to public roads in test in Gothenburg, Sweden.

Speaking before a conference on insuring autonomous cars in London on Thursday, Anders Eugensson of Volvo told the Guardian: “They [the engineers] will not read the newspaper; they will sit there ready to grab the wheel. We need to work on it [the technology] more before we can hand the cars to the public.”

Volvo is also using databases of car crashes going back decades to run a variety of simulations to make the cars safer. It will then start recruiting up to 100 commuters for the London trial to try out its semi-autonomous vehicles from the summer of 2018.

Eugensson said Volvo was looking for professionals of different age groups – people who regularly commute to or from west London via the M40, M4, M25 or A4.

“We focus on people who are normally frustrated when they drive to work in the morning. We really want people who say: ‘I think it’s going to be useful for me to be able to use this time.’”

The cars will drive themselves on motorways and dual carriageways, giving commuters a chance to “take the laptop and prepare for your meeting that morning, read the newspaper or update your Facebook”, Eugensson added. However, drivers will take over as soon as they get into London, with the vehicle signalling well before that the driver needs to take control.

The carmaker does not anticipate that drivers will need additional training or driving tests.“Our aim is to make it almost like using your smartphone,” Eugensson said.

The London trial is running in parallel with the one in Gothenburg, where Volvo has set up a website so people can register their interest. The Hain family are among those taking part in the Swedish trial. Eugensson said the carmaker would follow a similar approach in London.

Volvo is yet to decide whether to use unmarked cars in London, possibly with special licence plates to alert police to their semi-autonomous status. In Gothenburg, the vehicles are marked with bold blue stripes and the Drive Me name.

“We got a mixed reaction from other road users: some tried to damage the car and push it off the road,” Eugensson said.

The idea behind the trials, which are also planned for China and probably the US, is to find out how other road users react and whether motorists find self-driving cars safe and useful. A firewall will be installed between the vehicle’s different systems in an effort to ensure that steering, braking and acceleration cannot be hacked.

US government research predicts that driverless vehicles will lead to an 80% decline in the number of car crashes by 2035. Eugensson reckons it will be 30-40 years until fully autonomous cars are in everyday use.

The Volvo cars use a combination of cameras, radar transmitters, sensors, laser scanners, 3D maps and GPS. A trifocal camera at the top of the windscreen spots pedestrians and other obstacles that appear suddenly.

Aside from safety, insurance is the other big challenge. Experts are predicting a shift from a fault-based, or tort liability, system – in which companies pay according to each party’s degree of fault – to a product liability system. Data recorders (“black boxes”) will help establish whether the vehicle technology or the driver is to blame in the event of an accident. Insurance premiums are expected to drop, with young male drivers, who currently pay the highest premiums, likely to benefit most.

Jaguar Land Rover and Ford are also undertaking trials in the UK, but the Volvo pilot is the largest one on public roads. Self-driving pods and shuttles have been tested on pavements in Greenwich, Milton Keynes and Coventry, with the technology developed by Oxbotica, a spin-out from the University of Oxford.

Volvo’s self-driving cars will come with a hefty price tag, Eugensson said, although it is set to drop once they become more common. Last year, its chief executive, Håkan Samuelsson, told the Guardian that Volvo hoped that one in four owners of premium cars would buy a self-driving vehicle.